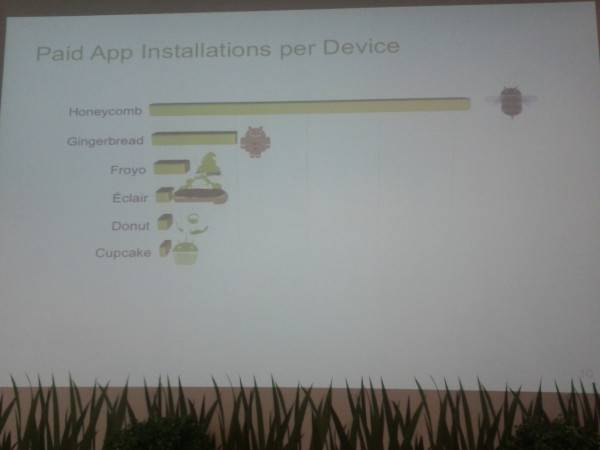 At the Android Developer’s Lab in London this morning, Google laid down this gem of a statistic: the number of paid apps being purchased on Honeycomb tablets has increased almost four times over in comparison to other versions of Android. You can see the (rough) growth in the presentation chart posted by Little Fluffy Toys. It claims that Honeycomb users install a much higher number of paid applications than any other section of Android users.

Now, the devil’s in the details for this nugget of information. Google didn’t release any actual numbers, but according to the new OS breakdown posted yesterday, we know that less than 2% of Android devices are currently running Honeycomb. Combine that with the fact that Android users are statistically much less likely to purchase apps in the first place, and you can see why developers might be hesitant to invest time and money into expensive tablet apps. Google is hoping to turn that thinking around.

In a comparison with iPad users, we know that Honeycomb users buy less than half as many non-free apps as their iOS counterparts, and pay less per app as well. There’s a bit of a chicken and egg situation going on, since they can hardly be expected to start shelling out $5 and $10 for apps that, in many cases, simply aren’t there. In any event, the new information that a paid Honeycomb app has a much higher chance of actually being installed on any given user’s tablet aught to spur at least some excitement, especially once developers get used the unified APIs for Ice Cream Sandwich.