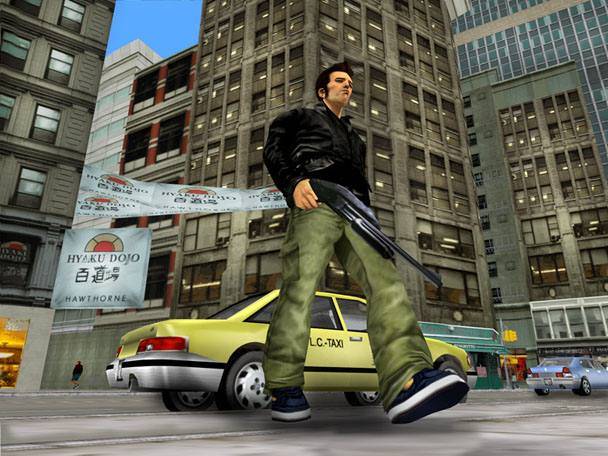 Ah, the simple joy of a city-spanning police chase culminating in a ramp jump over a train station, ending in a bullet-riddled fireball of fiberglass and steel. It’s a pleasure that’s been missing from the Android Market for far too long. But that will change this fall, when Rockstar ports the classic action game Grand Theft Auto III to Android phones and tablets.

Grand Theft Auto III hit the Playstation 2 ten years ago and became a smash hit almost overnight. While parents and teachers wrung their hands about the ultra-violent gameplay (at least by 2001 standards) game reviewers raved about its open-world environment and do-anything structure. GTA III basically invented the “sandbox” genre that’s become so popular over the last decade, and continues to sell millions of copies every time a new installment is released.

The Android version of Grand Theft Auto III will need some pretty powerful mobile hardware – even though the graphics are limited by today’s standards, those huge environments will test the processors and RAM of even the latest phones. The developer mentioned specific support for the Samsung Galaxy S II and Galaxy Tab 10.1, so you can expect that other top-of-the-line phones and tablets will also be featured. Of course, an iOS version will be forthcoming as well.

Android is seeing a positive renaissance when it comes to classic gaming. In addition to the vibrant emulation scene and new games like Minecraft, gaming staples like Duke Nukem and Leisure Suit Larry are headed onto Android phones and tablets soon. Like those games, Grand Theft Auto III will almost certainly be right at home in the “Mature” section of the Android Market.