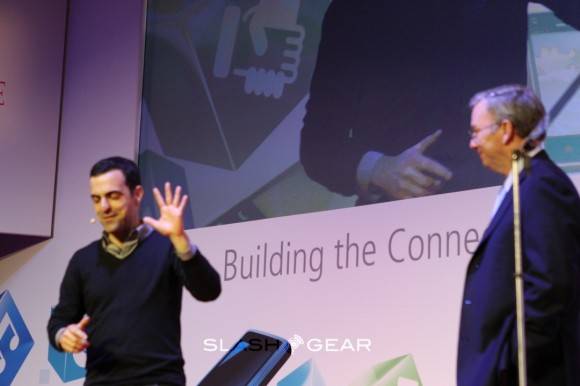 Mobile World Congress isn’t all about new phones and tablet,s and Google Chairman Eric Schmidt demonstrated why with his hour-long keynote presentation hosted by the GSMA. Most of if was expended in showing off Google altruistic intentions for getting both technology and connections into developing markets, and Android’s a big part of that. In addition to articles here on Android Community on Android penetrating into the featurephone category, lowering entry prices to $70 or less, and Chrome’s safety as a browser, we’d like you to check out even more ocverage on our sister site, SlashGear.

First of all, Google doesn’t have a problem with “forked” versions of Android, or more accurately, Android devices that intentionally don’t have access to the Android Market. That said, they hope that demand from consumers will lead OEMs and other partners to choose the Android Market over other alternatives. Oh, and Schmidt says that Google doesn’t sue – unlike some other folks. Google also briefly considered a completely closed currency, then coined “Google Bucks“, to rival other third-party currencies like BitCoin. But in the end, they chose to abandon the project when faced with strict regulatory laws for alternative currencies in many countries.

Speaking on Android as an operating system, Google’s Hugo Barra spoke about how Android and Chrome are becoming more and more connected, specifically in their ability to sync personal data across networks. Chrome (the desktop browser, mobile browser and integrated x86-based operating system) got a lot of love. And speaking more abstractly on the nature of new internet legislation like SOPA, ACTA and PIPA, Schmidt gave some fatherly advice to the first world and developing nations: “Do not give up Internet freedom. You will regret it.” On connected devices in particular and their pervasive nature, Schmidt reminded Android users that they’re in control – including the off button.

After two full days in Barcelona, most of the new hardware and gadgets have been revealed already. There’s still plenty of hidden gems to check out on the show floor, and the Android Community team will be there to find as much of it as we can before heading back to the states. To see the good stuff, keep an eye on our Mobile World Congress portal.