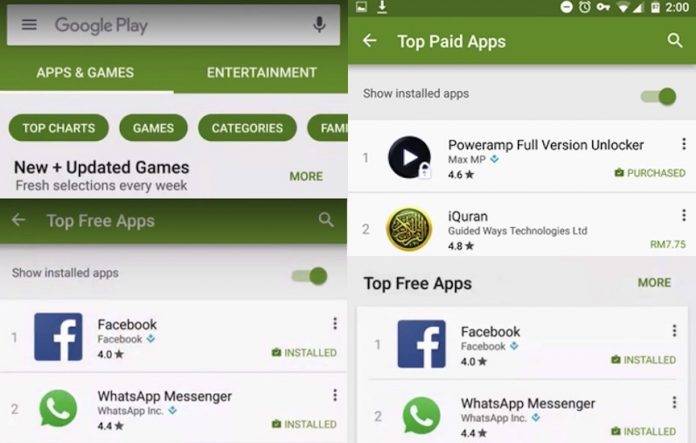 A new toggle switch is available on the Play Store. This information first came from several sources and tips that it appeared on a few devices but now it seems that it is ready for everyone. There is much to improve on the app where we buy and install other Android apps and Google is bent on improving the Play Store. The last related update we saw was the testing of new search suggestions and Apps and Games as separate sections.

Just recently, there is a toggle you can see that says “Show installed apps” on the app lists. That shows the apps already on the device but you still see them on the results when searching. That is actually redundant but with the latest update, you will no longer see the installed apps on the search results if you switch the toggle. Such apps will only appear if you turn it on.

This new toggle can be seen as part of the ‘Top Charts’ layout on top. You have the option to turn it on or off. The top charts splash layout looks new and the new toggle complements it.

One source of Android Police showed us a video demo of the update:

The Play Store devs’ adding of the “Show installed apps” toggle isn’t just for aesthetic purposes. It can actually be useful in other areas of the app UI.