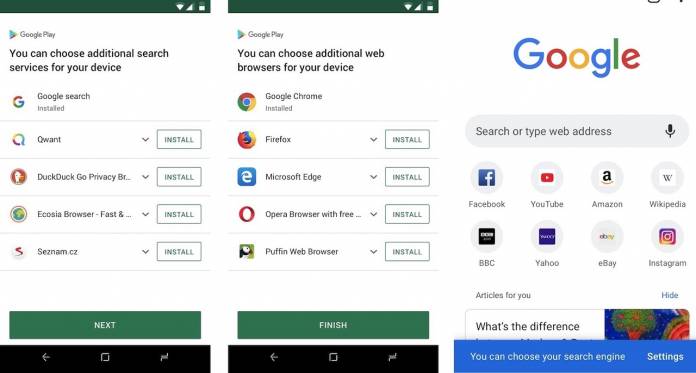 Android is known for customization. More people prefer the platform over iOS because the possibilities are endless. It’s not going to change anytime soon as the mobile OS thrives on responding to the personalization demands of the consumers. The process includes app installation, selecting default services, and screens for Android users. In response to the ruling by the European Commission, Google is introducing new screens for those in Europe. They will include an option to download other browsers and search apps and not just provide them the default Google apps.

For new Android users, such screens will be shown off to first time users. They will appear once the next update is downloaded and installed. You will see a screen for search apps and another screen showing browsers available.

Each screen will only show a maximum of five apps. It will include those that are installed already. Uninstalled but popular apps will also be shown in random order so you can choose from the list. Simply select ‘install’ to start downloading and installation.

Once installed, the browser or search app will then show up on an additional screen. Instructions will pop up, telling you how to set up a new mobile app. As with most Google, Chrome, or Android devices, the system will ask the user if they want to change Chrome’s default search engine.

The changes will hopefully satisfy the European Commission and many users in the region. The changes will finally roll out in the coming weeks to old and new Android smartphones in Europe.

Choosing your search engine has always been possible on Android but the Google developers want to iterate that you can really do so. Google is done dealing with the European Commission’s going after the company for breach of antitrust laws. It’s already making some changes and updates to its products in Europe so let’s wait and see for related actions.