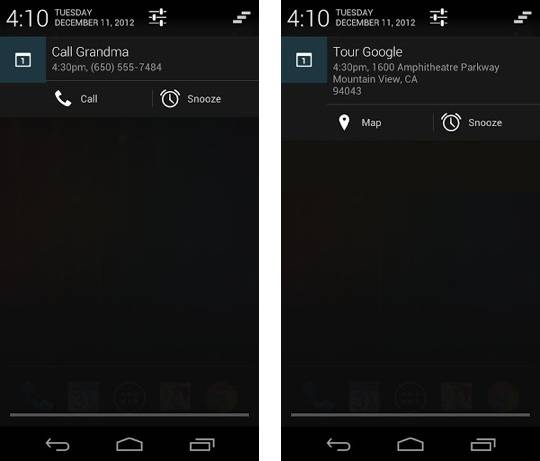 Google Calendar originally rolled-out as a stand-alone app back in October, and well, it looks like Google has just released an update. And nicely done, this one adds some worthwhile functionality. Unfortunately though, not all issues have been addressed and there is still the warning for those with an HTC device.

Some of the use cases include being able to make a call, or even get directions from the notification. This looks like a perk for those who use their calendar as a to-do list scheduling everything. Now (as seen in the above image), you can schedule that call to Grandma for a certain time and once the notification comes in, just hit call and be connected. Of course, the notification also includes the option to snooze, just in case you are not quite ready.

Otherwise, aside from the issues with HTC devices, the Google Calendar app remains available only for those running Android 4.0.3 or later. We suspect the HTC issues will be resolved at some point moving forward, but while we wait — one thing seems clear, with Google having released the Calendar app as a stand-alone, we are now going to be able to get new features and tweaks on a more regular basis. Sort of like what we have been seeing with the Gmail app.