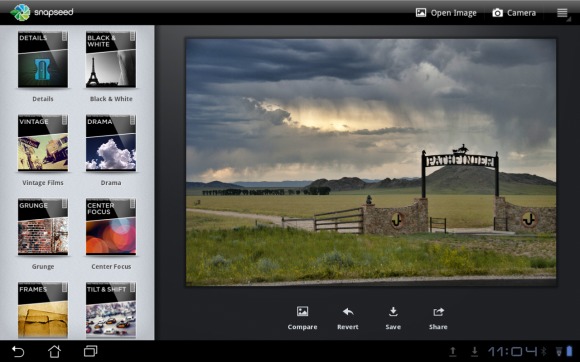 Nik Software, the company behind the popular photography app Snapseed, has been bought by Google today. The search giant plans to bolster its Google+ photo features with the Snapseed acquisition and compete with Facebook and Instagram head on. The app, which is available on iOS, Mac and Windows (with an Android version coming soon), has gained over nine million users within its first year.

To compete with the likes of Facebook and Instagram, Google has added some great image-editing features to Google+ over the past year or so. Features like facial recognition for improved photo tagging and higher-resolution photos are just some of the updates that Google has focused on. Snapseed-like photo editing in the Google+ would certainly put it on par with Facebook and Instagram’s photo capabilities.

Nik Software has been around for almost 17 years creating all sorts of photography software. Snapseed has been one of their more successful projects and it’s easy to see why. The company has made “photography first” their motto and is certain that they will be able to spread their message to millions more with this Google acquisition.

It’s not known exactly what new photo features will come to Google+ with the Snapseed buyout, but Senior Vice President of Engineering at Google+ Vic Gundotra says that they “want to help our users create photos they absolutely love, and in our experience Nik does this better than anyone.” It’ll be interesting to see what Google+ comes up with to further challenge Facebook and Instagram.