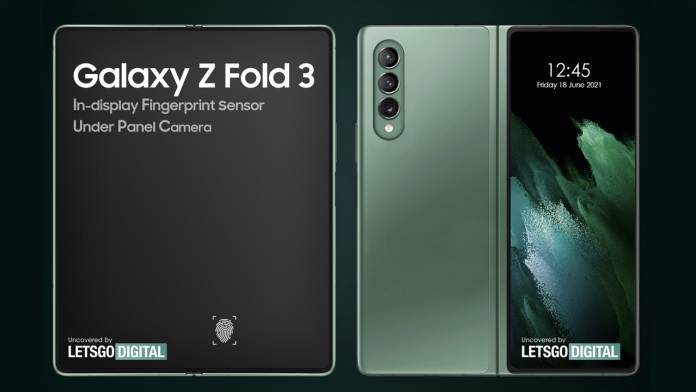 In all likeliness, Samsung would be launching the next foldable smartphones at the Galaxy Unpacked event expected to be held in August. At the event, a Galaxy Z Fold 3 and Galaxy Z Flip 3 are the two foldables that will probably debut with the former being the first Samsung handheld to feature an under-display camera. Now a patent application has revealed that Samsung wants to include a selfie camera and few other sensors under the panel.

It is difficult to point that this patented technology is making way into the Samsung Galaxy Z Fold 3, but if it does, we are looking at something very novel and exciting. There are hints however that this tech may have found its way into the said smartphone.

It is believed that the patent was applied by Samsung toward the end of November 2020 – since we have been hearing rumors about the camera finding way under the Galaxy Z Fold 3 display. Some references hint that the patent may have been applied in South Korea back in 2019.

The patent notes, as previously rumored, that camera will be placed under the inner, flexible display of the foldable smartphone that can open like a tablet. The sensors in question, in addition to the camera sensor, include a fingerprint sensor, a proximity sensor and a receiver.

The camera module on the other hand is placed in the center of the right half of the foldable screen. Space has been categorically left clear on either side of the module to include several cameras in the future – three or more as mentioned in the patent. The in-screen camera that may make it to the Galaxy Z Fold 3 is expected to be a Sony-manufactured 16MP selfie shooter.