The Samsung Galaxy S9 and S9+ are no doubt the latest premium flagship phones that many mobile consumers are probably considering. There are the loyal Samsung fans and there are those interested to see if the new S9 series is really worth the price. For people looking for a better phone camera, they like the reimagined camera system and the fact that the S9+ is on top of DxoMark with an almost perfect score–99/100. We’ve already got our hands-on feature but we have yet to publish our comprehensive mobile review.

When it comes to durability, the phone has passed JerryRigEverything’s Scratch, Burn, and Bend Tests. Recent teardowns have revealed the variable aperture camera lens and fancy camera aperture tricks.

The phones are said to have a 20% thicker glass plus a stronger AL 7003 middle frame. SquareTrade wanted to know the strength of the S9 and actually discovered it is more durable than the iPhone X and the Galaxy S8 but only slightly. 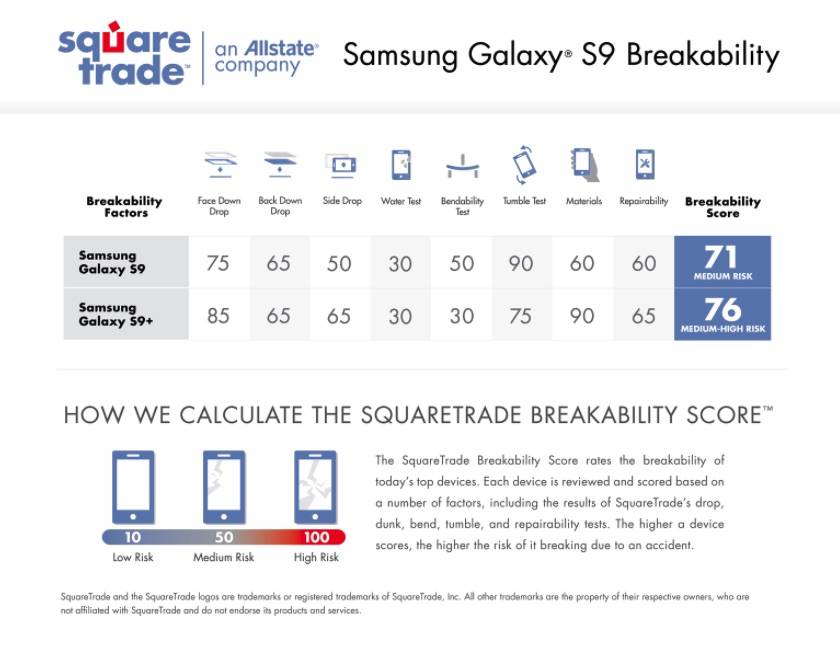 With the help of scientific bots to do drop tests, SquareTrade was able to know the breakability of the new flagship phone.

Here is a summary:

• Face Down Drop Test. Both phones crash-landed on the first face down drop and suffered extensive damage across the screen. The sharp shards of glass found on last year’s S8 test were missing though.

• Side and Back Drop Tests. The S9 was damaged on the back panel only. Last year’s S8 shattered on both display and back panels.

• Tumble Test. There was considerable damage on both display and back panels.

• Repairability. The phone’s repairability isn’t different from the previous gen of Galaxy S. The back panel is still difficult to remove as preserving the LCD display is still a challenge.