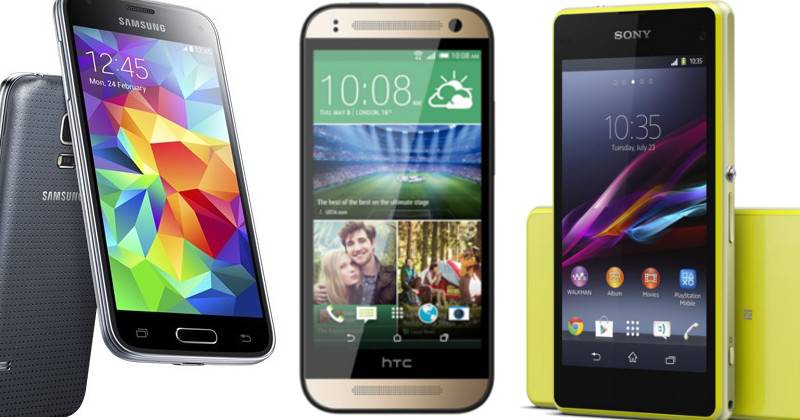 Now that the Samsung Galaxy S5 mini has been revealed, it’s time we took stock of the market. Most of the major manufacturers now have a “mini flagship” for this half of year and now we have to ask ourselves, which one between the Galaxy S5 mini, the HTC One mini 2, and the Sony Xperia Z1 Compact truly deserves the title of being small but adequately terrible.

We won’t flood you with hardware specs, because keeping tabs on three devices is definitely a chore. But since a picture paints a thousand words, this pretty image below more or less summarizes the common specs between these three mini smartphones. 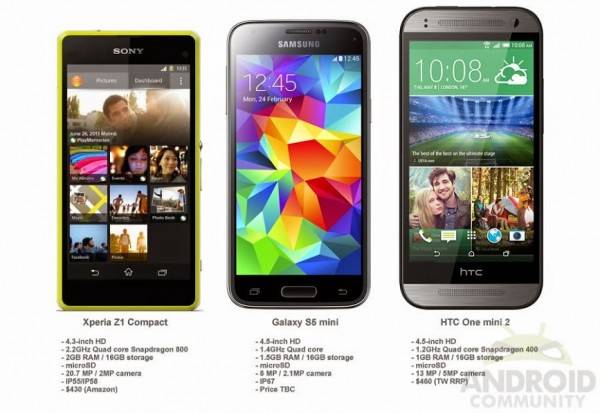 We can already see at a glance one that is emerging victorious, but for the sake of argument, let’s dig deeper into each one’s special features to see if there is more to them than just spec sheets.

The Samsung Galaxy S5 mini shares with its older brother many of the prime features that one would want in the flagship. That means IP67 dust and water proofing, heart rate monitor, and fingerprint sensor. The fact that the device also uses a Super AMOLED display means you can avail of the new Ultra Power Saving Mode, a.k.a. black and white mode. The smartphone surprisingly also has support for Cat4 LTE networks, so you get faster theoretical download speeds. Of course, you get to wrestle with TouchWiz on this one

The HTC One mini 2 looks pretty much alike the HTC One M8, but that is almost all that the two have in similar. Of course, there is also Sense 6.0 inside and BoomSound audio, but that’s pretty much it. No UltraPixel Duo camera at the back and even the build has less metal and more plastic to it. Admittedly, it still looks pretty classy, which might be the one thing going for it, unless you also root for the software running on top and HTC’s way of doing things.

The Sony Xperia Z1 Compact is the oldest of these three and yet apparently it is also the most gifted. Sure it has a smaller 4.3-inch screen, but that only means it has a better pixel density at the same 720p resolution and a more manageable size. It doesn’t have that high IP67 rating, but IP55/IP58 might be enough for most cases. And while it doesn’t have an UltraPixel camera, the 20.7 megapixel sensor from a trusted camera maker might make up for it. An almost vanilla Android, plus a supported bootloader unlocking procedure, might also appeal to some people.

Smaller, beefier, and even cheaper, at least from Amazon. That’s how the Xperia Z1 Compact wins the day. True, we still don’t have the Galaxy S5 mini’s SRP, but Samsung would most likely make it competitive with the rest, meaning around $400 as well. The wealth of sensors and Cat4 LTE support, however, might appeal to some. LG has yet to show it cards as well, so we don’t exactly have a complete picture yet.. There is also talk of an Xperia Z3 Compact even while an Xperia Z2 Compact is nowhere to be found. For now, however, the small Xperia Z1 Compact stands tall as the king of the mini hill.