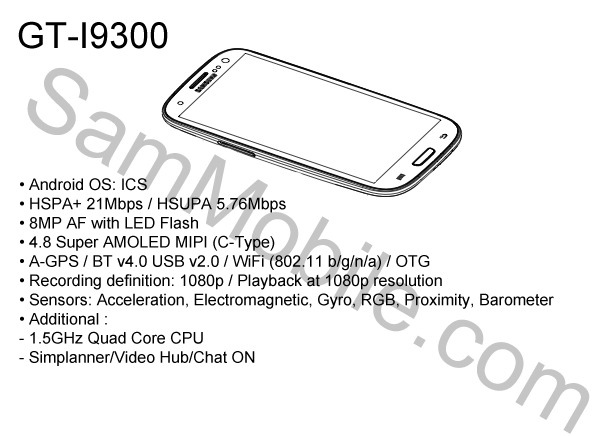 We’re sorry about the overabundance of Samsung Galaxy S III news on the site lately. Wait, no we’re not – we’re just as excited as you are. The latest tidbit comes from SamMobile, who got their hands on what appears to be a scan of a portion of the Galaxy S III’s service manual (using the previously reported GT-I9300 model number). While the black-and-white diagram of the phone looks pretty close to what we’ve seen before, the specifications clash with both Samsung’s official Exynos 4 Quad announcement and results spotted in the AnTuTu benchmark database.

How do they differ? Let me count the ways. First, a quad-core processor is mentioned, but at a slightly higher 1.5Ghz clock speed than the Exynos 4 Quad. The screen is 4.8 inches, again, just slightly larger than we’d heard before (4.6 and 4.7 inches). A 8 megapixel camera is a disappointing step down from the 12MP sensor noted in AnTuTu.  Other mentioned specifications stand up to reason and rumor, like an unspecified version of Ice Cream Sandwich and an HSPA+ mobile connection.

It must be said that this sort of thing could be faked easily, and the Galaxy S III seems to be particularly prone to less than honest tipsters. It could also be from an earlier build of the service manual, before the final phone specifications were finalized – the clock speed of the processor would be particularly easy to change, for example. We won’t have to wait too much longer to find out: Samsung announces “the next Galaxy” on May 3rd at the Mobile Unpacked event in London, and Android Community will be there live to cover it.

Update: SamMobile has added a sketch of what looks like the back battery cover. Feast your eyes: 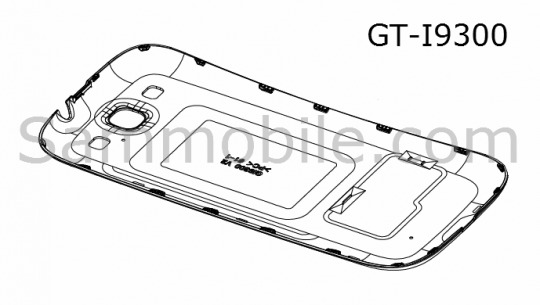