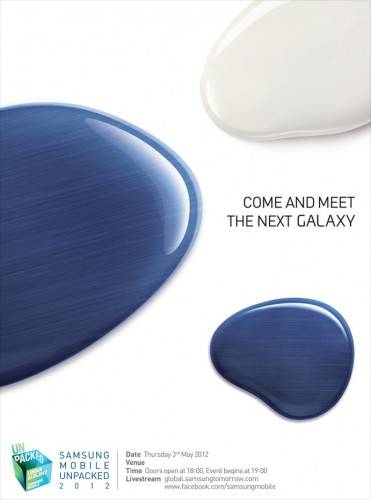 After months and months of speculation, to say nothing of a truly unprecedented amount of rumor and fakery, Samsung has finally set an announcement date for what will almost certainly be the Galaxy S III. The Samsung-only event will be held in London on Thursday, May 3rd, fulfilling their commitment to announce the Galaxy S II’s successor outside of the usual trade show venues like Mobile World Congress. Naturally there’s no other official details to be had at the moment, but the event is being christened “Samsung Mobile Unpacked 2012”, setting up months before last year’s October event.

The Galaxy S III (if indeed that ends up being the smartphone’s final moniker) is hands-down the most rumored and least leaked Android phone we’ve ever seen here at Android Community. What seems like dozens of fake renders and blurry Photoshop jobs have passed across our desks, each less convincing that the last. The only compelling evidence we’ve seen thus far is the OLED Association’s assertions that the screen will be a 4.6-inch Super AMOLED panel with a non-Pentile layout, almost certainly with a 720p resolution.  An unnamed Samsung executive was also quoted as saying that the phone would be powered by a quad-core Exynos chip.

There was considerable speculation after Mobile World Congress that Samsung had delayed the Galaxy S III to better position it against the inevitable iPhone 5 – if sales trends from the GSII and iPhone 4S continue, the two devices may become the best-selling hardware on their respective platforms. While recent evidence that the phone was still in the concept stage just weeks ago would indicate that the delay was more practical than strategic, there’s no denying that Apple and Samsung are setting up for an epic retail showdown. Release and price are up in the air at the moment, but given Samsung’s past patterns, expect the international version of the Galaxy S III to be available the following month.