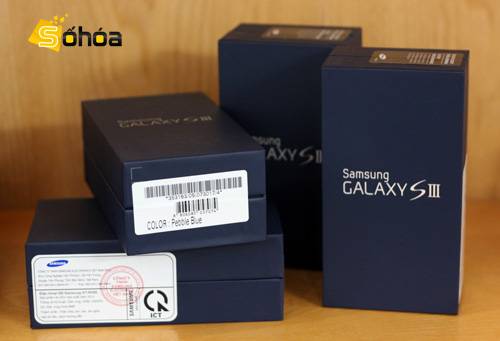 Now this is interesting. After we’ve reported several times that the Pebble Blue Galaxy S III has been delayed, and even received confirmation from Samsung themselves it looks like they’ve still managed to ship some out in limited quantities. For now the news is still trickling in but a few shops in Vietnam have received large shipments of the Pebble Blue version.

According to our friends at Sohoa in Vietnam multiple small batches of the Pebble Blue version have arrived, and from the pictures provided it looks awesome. We don’t see any manufacturing problems with the rear of the device, no discoloration or “milky” issues like we reported on yesterday.

While Samsung has still remained rather tight lipped about the situation it is highly possible that multiple casings made it out of the shop floors just fine and did not suffer defects. If that is the case Samsung has more than likely shipped out small numbers of the Pebble Blue Galaxy S III to retailers and they might actually be available to purchase this weekend, just in extremely limited quantities.

While we wait to see if similar reports come from other markets, if you’re located in HCM City or Hanoi, Vietnam multiple shops have reported Blue versions being available. We’ll update once we hear more details from other markets.