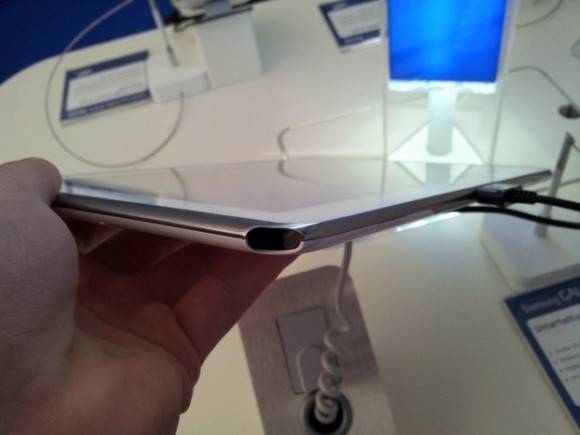 Well how about that – a quad-core Exynos processor isn’t the only revision made to Samsung’s upcoming Galaxy Note 10.1 tablet. According to a couple of pre-release photos spotted by Tablet Community (no relation), it’ll also get a slot for the S-Pen stylus built right into its slate body. The lack thereof was definitely noted when the device was revealed at MWC earlier this year, though it now appears that the hardware shown at the show was very early indeed.

The new S-Pen stylus is somewhat smaller and more similar to the original smartphone Galaxy Note, the better to keep that 10-inch tablet body slim. Samsung will be offering a larger and more traditional “pen-shaped” version of the stylus for artists and note-takers who want to take even more advantage of the Wacom digitizer embedded into the 1280×800 screen. When the Galaxy Note 10.1 releases (whenever that happens to be) it’ll be using a quad-core processor from Samsung instead of the dual-core chip originally shown off in Barcelona.

Other tidbits garnered include the predictable range of first-party cases in at least five different colors and a vehicle dock – Android Community does not recommend trying to jot down meeting notes while behind the wheel. There’s no indication of when the Galaxy Note 10 will finally hit the market, and no real way of guessing, considering all the revisions that Samsung has been making. But a safe bet is that the faster and more advanced ICS tablet will demand a premium over the more vanilla Galaxy Tab 2 10.1, which starts at $399 in the US.