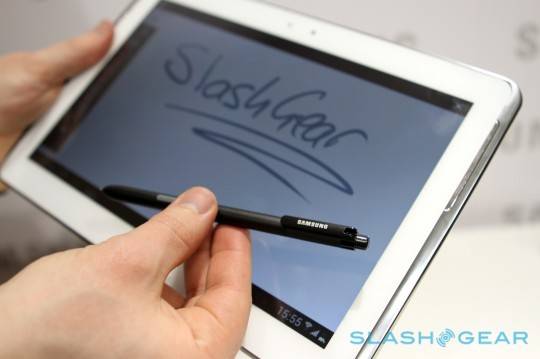 Big news appears to have hit the streets over the past couple of days regarding Samsung’s next onslaught of Android tablets. Earlier this week we reported the Galaxy Tab 2 with Android 4.0 ICS was delayed until late April although no reason was released. Today we are now hearing the Galaxy Note 10.1 has also been delayed, but with good reason. The delay is because it will be receiving a quad-core instead.

According to details gathered by PocketDroid the 10.1-inch Galaxy Note has been delayed to sometime in June as Samsung replaces the 1.4 GHz dual-core under the hood with their own in-house quad-core Exynos processor. It is possible that they’ll go with the Tegra 3 too, but most likely they’ll opt for their own silicon.

These details has seemingly been confirmed by a local economic newspaper in Korea the IPD but we will continue to hunt for more details as this is just hitting the wires. The Galaxy Note 10.1 features the same impressive S-Pen technology as the Galaxy Note, and will launch with Android 4.0 Ice Cream Sandwich on board. I personally don’t mind a small delay if that means we’ll be seeing a quad-core to compete with the Tegra 3. We’ll update with additional details once made available.