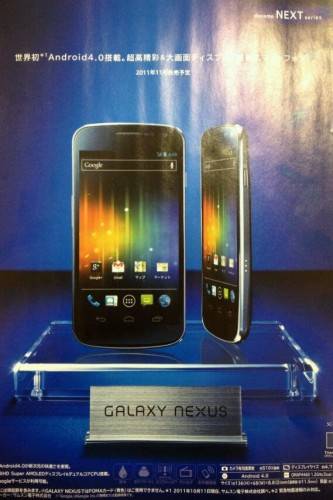 Japanese cell phone carrier NTT DoCoMo has already tweeted the release date for the much-leaked Samsung Galaxy Nexus, and now they may have given us our very first official look at the front of the Ice Cream Sandwich developer phone. A flyer promoting the November local launch date shows the Galaxy Nexus in all its glory, along with yet another set of specifications. The hardware lines up with previous spy videos and mock-ups.

While the phone itself is a pretty sight, the real star here are the specifications, which may indeed be the last word in the back-and-forth leaks that have been running around the tech world lately. a 4.65-inch Super AMOLED display with an impressive 1280 x 720 resolution is confirmed, and you can see the integrated Android navigation buttons at the bottom of the screen. The curved construction of the phone allows it to be super-slim, though not all the way through: at its thinnest point the phone will be 8.8mm, while the “Galaxy hump” will stretch it out to 11.5 mm. The phone runs on a 1.2 GHz dual-core processor (TI OMAP4460, if you’re curious) with a gigabyte of RAM and  32GB of on-board storage. 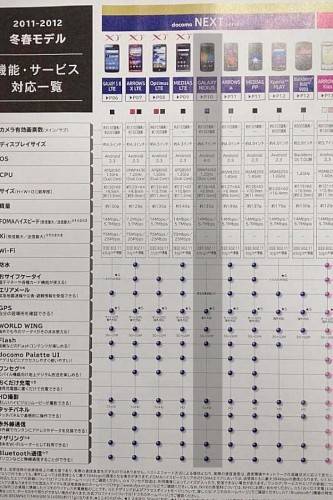 One area the phone seems to be lacking in is its 5 megapixel camera, though full 1080p video recording is included. The Galaxy Nexus will use NTT DoCoMo’s UMTS/WCDMA network with maximum data speeds of 14.4Mbps down and 5.76Mbps up, and with a roomy 1750mAh battery, it should last you a good while on it. And of course, it’s running Android 4.0 Ice Cream Sandwich.

The photo and specifications seem official enough, but none of this is officially official until late tonight. Keep an eye on Android Community and @Androids at 10:00 PM EST for all the news as it comes out of the Google-Samsung event.