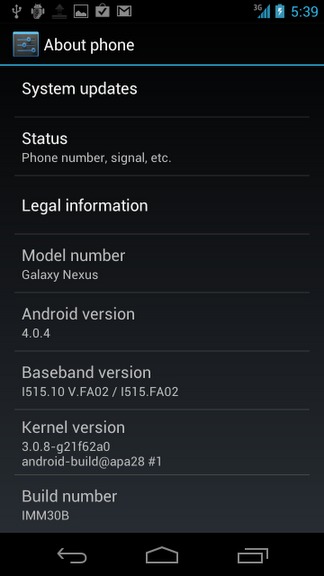 On the day past, the Android 4.0.4 software update for Verizon’s Galaxy Nexus leaked, and lo, there was much rejoicing across the Android nation! And yet, those users running custom ROMs did cry verily, “Well crap, now I gotta wait for the dev to update before I can get better reception.” Then a voice spake: “Nay, Android power user! I have for you a flashable ZIP file, which does include both new radio basebands and a bootloader besides. Go forth and spread the good word: adrynalyne of XDA hath delivered you mildly better 3G and 4G data performance! Huzzah!”

In case you weren’t following along: a kind XDA member has posted just the radio and bootloader updates for the CDMA Galaxy Nexus, bringing the baseband up to date without affecting your current ROM. This is especially useful for users of heavily modded Nexus ROMs, like the popular Android Open Kang Project. Just download the file in the source link to your 4.02 or 4.03 CDMA ROM, reboot into your recovery, and flash the ZIP file. There have been no issues reported thus far, but it’s always a good idea to make a Nandroid backup just in case. NOTE: The radio in the XDA thread DOES NOT work with the international GSM version of the Galaxy Nexus.

Users are reporting improved signal by about 10% in previously spotty areas, and the hand-off between 3G and LTE connections seems to be smoother as well. Of course, you won’t get access to some of the more flashy tweaks in Ice Cream Sandwich 4.0.4, but if you’re reading this, odds are pretty good that you keep your custom ROM up to date. Developers have already started updating their ROMs, and the nightlies and betas should all be ready by the end of the week. Happy flashing!