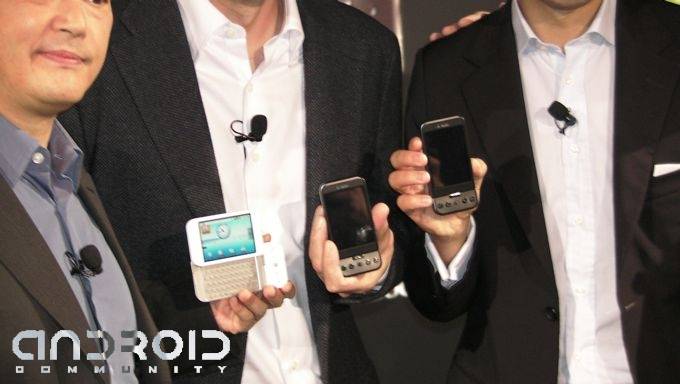 After the main announcement this morning, we spent some hands-on time with T-Mobile’s new G1 – the first production Android device.  The HTC-made device has quadband GSM together with HSDPA 1700/2100, WiFi, GPS, Bluetooth, a 3.2-megapixel fixed-focus camera and a 3.2-inch 320 x 480 flush-fit touchscreen.

Slide the display to the right, and a full QWERTY keyboard with dedicated search button is revealed.  The search function is device-wide and context specific: hit the button while browsing your contacts, for instance, and it will search through individual records.  Press it when in the Webkit-based browser (which uses the same underlying technology as Google’s Chrome browser for desktop) and it triggers a standard Google internet search.  Our first impressions of the browser were that it didn’t seem quite as slick as Safari on the iPhone 3G, but the hardware keyboard – while not the best we’ve used on a mobile device – made entering site addresses and filling in online forms far easier.

Size-wise, compared to what will likely be its most quoted competitor, the T-Mobile G1 is thicker and longer than the iPhone 3G.  It’s narrower, though, and of course much of the bulk is from the sliding section.  A removable battery adds its own girth, too; the G1 talktime is estimated at up to 350 minutes WCDMA or 406 minutes GSM; standby at 402hrs or 319hrs for WCDMA or GSM respectively.

Storage is down from the iPhone 3G too – a 1GB microSD card is in the box, with a maximum of 8GB supported – but the G1 can send MMS messages and has Street View and a digital compass for use with Google Maps.  You’ll have to either use HTC’s headphones or an adapter, though; the G1 lacks a normal 3.5mm socket in favor of the company’s “HTC ExtUSB” which combines mini-USB with audio.

As expected the G1 uses a multi-core Qualcomm chipset, the MSM7201A running at 528MHz and paired with 256MB ROM and 192MB RAM.  One notable omission is A2DP stereo Bluetooth – that will apparently come in a later Android release.