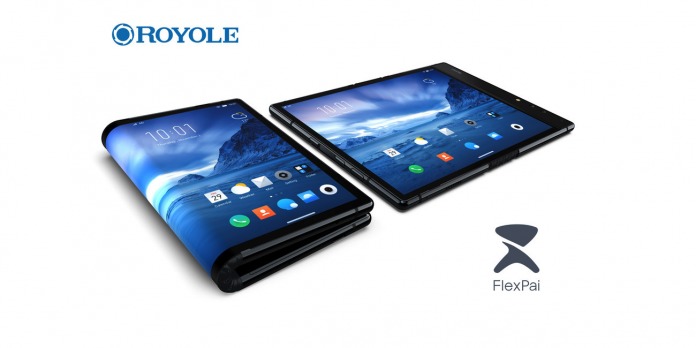 Foldable just got real. That’s what was on our mind when we first learned about this smartphone that could give the yet-to-be-unveiled Samsung Galaxy X foldable phone a run for its money. We thought the South Korean tech giant only have to worry about Huawei launching its own foldable phone rival but a company known as Royole introduced the FlexPai. We haven’t heard of Royole before but we’re impressed it is able to launch something bigger OEMs have been working on for years.

Royole is described as a maker of human-machine interface technologies and technologies. We’re thinking robots but they only have flexible displays and flexible sensors. There are several smart devices as well so it is able to come up with a working foldable phone. By foldable we don’t mean another clamshell but one with a flexible screen.

The FlexPai Foldable Phone boasts a special flexible display that extends to the back. You can use it while folded or opened. From a smartphone, you can transform it into a tablet with a high-resolution display.

The brand’s Flexible+ platform made this thing possible. We’re guessing other OEMs may start checking out the technology to apply on their products. The FlexPai has potential to beat the Galaxy X but at this point, we still don’t know what are Samsung’s official plans.

The FlexPai foldable phone comes equipped with the following: a 7.8-inch display that folds, 7.6mm to 15mm thickness, dual 16MP + 20MP cameras, a Qualcomm 7nm CPU which could be the Snapdragon 8150 (unconfirmed), and 5G connectivity in the near future. The device will be available commercially but it will still be the developer model. The consumer model will be ready by December of this year. Still no information on pricing but we’ll let you know soon.