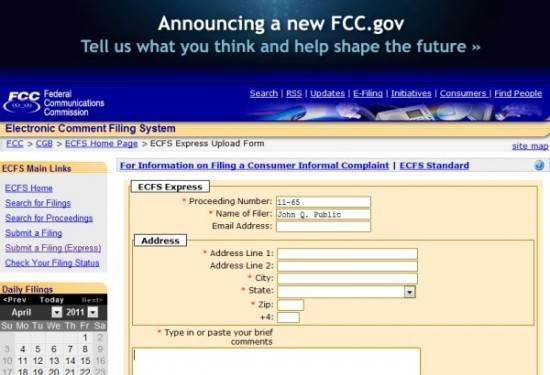 With the upcoming $39 Billion AT&T/T-Mobile USA merger, it’s quite understandable that users of both networks are concerned how it will affect them. The FCC is concerned as well and has started a new commentary portal for users concerned with the mega merger. Users can go to the FCC ECFS Site here, and look for proceeding number 11-65 with the title “In the Matter of applications of AT&T Inc. and Deutsche Telekom AG for consent to assign or Transfer Control of licenses and Authorizations. ” Then you can fill out the form and follow the prompts to have your voice heard.

Everyone is chiming in on this merger. As we reported here, other networks have officially filed objections with the FCC. Consumer Reports, however, is of the opinion that service should improve for both networks as a result of the marriage. But they also think that T-Mobile customers will see a price hike. They also say that those who object to it are more likely to have more to lose.

As we reported shortly after the news broke on the merger, T-Mobile has gone so far as to assure their customers that the merger won’t be completed overnight, but that AT&Ts conversion of their 4G network will take years. Meantime, users will still be able to enjoy T-Mobile’s service and that upgrading of phones and services will happen according to a normal service life of each contract. In the end, T-Mobile customers will have a faster, more robust network. But if you’re concerned, the FCC definitely wants to hear from you.