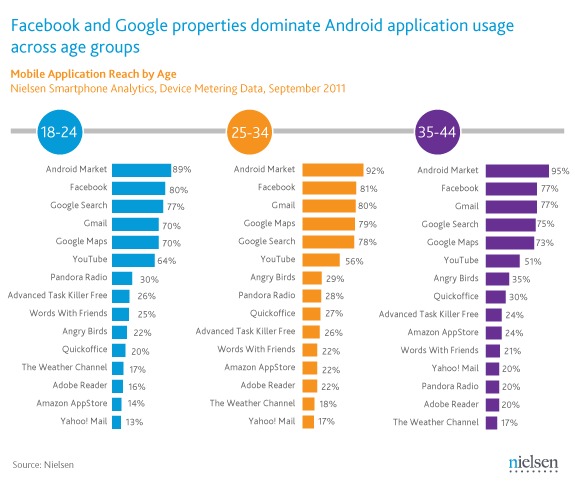 I know, I know, stop the presses: Facebook is the most popular app on Android. The statistical wizards at Nielsen reached this conclusion based on active usage, not total downloads, noting that the recently-updated Facebook app has the most penetration across all of Android’s user groups after the Android Market itself. The fact is at least a little surprising, since Facebook beat out Google’s entrenched apps like Search, Gmail and Google Maps, which all had slightly lower user groups in every category.

Nielsen breaks down the distribution of most-used apps by how many users opened the app in the last 30 days. So while nearly 4/5th of the Android population uses Facebook on a regular basis, only about three quarters actually use Google Search, which is built right into the framework of Android. When it comes to third-party apps, Facebook absolutely kills the competition, with Angry Birds getting less than half the active users that Facebook enjoys from the 35-44 crowd. Other notably popular apps by usage include Pandora, QuickOffice, Yahoo Mail, Adobe Reader and Advanced Task Killer Free, despite the latter being unnecessary for almost all current Android devices.

The Android Market beats all, but since it’s a gateway to almost all third-party apps that’s understandable. Strangely, younger users actually seem slightly less inclined to download apps than their 25-44 counterparts. Among 18-24 year-olds, 89% use the Market regularly, compares to 92-95% for older users. Angry Birds is also significantly more popular in the older age group, a fact that lines up with some personal observations. Don’t install Angry Birds on your grandmother’s shiny new DROID this holiday season, unless you’re keen on hearing a dozen different varieties on the theme of “SQUUAAAAK” all weekend.