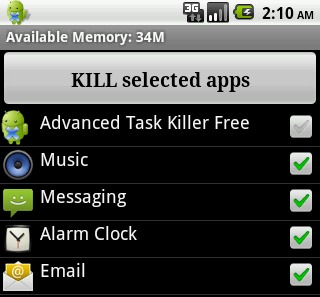 Google doesn’t like task killers, and they’ve been steadfastly saying so since the release of Froyo – which, not incidentally, broke functionality for many of them. There are still some hold-outs that claim they’re useful for saving the ever-important battery on Android phones, but according to some in-depth research from PCWorld, that just isn’t the case. After running the most popular example, Advanced Task Killer, through its paces, the conclusion was that the extra monitoring and other services had almost no effect on the phone’s longevity.

The labs put five phones through their paces: the HTC Evo 3D, Sensation 4G and Thunderbolt, the Motorola DROID BIONIC and the Samsung Galaxy S II. While the HTC phones showed a marginal battery life improvement of 2-4% (well within the margin of error), the BIONIC was flat, and the Galaxy S II actually lost a small amount of time. The app was set to kill any applications that weren’t open but residing in memory after an hour.

Note that these findings aren’t necessarily an argument against all task killers, just against the idea that they’re useful as battery savers. Even the developer of Advanced Task Killer doesn’t advocate its use as such – we’re only supplying the information in the hope that the battery myth will be further dispelled. Task killers can still be used to zap that pesky non-responsive app, but then, so can the Application settings menu. Here’s a tip for all you CyanogenMod users out there: hold down the Back button to kill the open app instantly. (Update: go to Settings>Applications>Development to enable – thanks, mrben!)