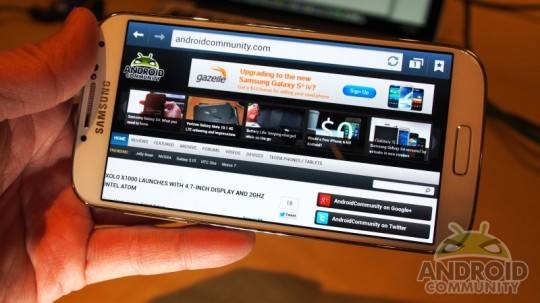 Here’s some very disappointing news for those of you living in the UK. The UK version of the Samsung GALAXY S 4 will not be carrying Samsung’s highly anticipated Exynos 5 Octa processor, but instead will be coming with a 1.9GHz quad-core Snapdragon 600 processor. This news has been confirmed by Samsung, and there may be a possibility that several other markets will find their S 4’s shipping with a Snapdragon 600 as well.

But even so, many consumers were looking forward to using an 8-core processor that capitalizes on both power savings as well as high-end mobile processing. A GALAXY S 4 without an Exynos 5 Octa may be a deal breaker for many, especially for those who believe that the Samsung GALAXY S 4 is more of a slightly boosted Galaxy S III than it is an innovative new phone. Perhaps the lack of an Exynos 5 Octa is enough to drive consumers to the HTC One.

The Samsung GALAXY S 4 made a splash onto the scene March 14th in a huge, Broadway, soul-wrenching presentation. It boasts the latest high-end specs in the market, and even better features that Samsung believes will make it your “companion for life”. However, Samsung received a lot of critiques from consumers who say its too similar to the Galaxy S III. And with the reports that the Exynos 5 Octa won’t be making it to several markets globally, we’ll see if it can reach its forecasted “100 million S 4 sales goal”.