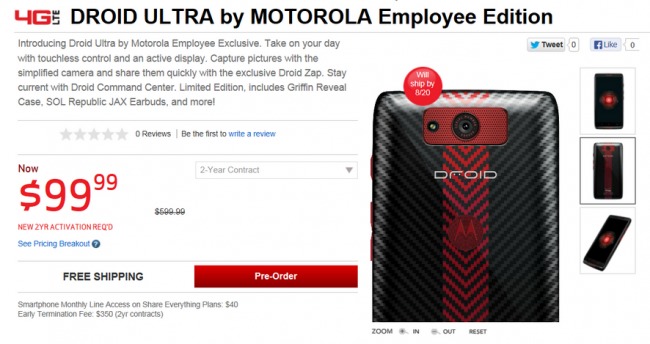 An in-the-wild style image of a red stripped DROID ULTRA leaked a short time before the Verizon announcement. The handset was showing a Limited Edition marking and while it was believed to be something intended for employees, we had yet to see anything in terms of a confirmation. Well, coming by way of a recent product listing — we can now say for sure that the red-stripped DROID ULTRA is only for Verizon employees.

We suspect some many be a bit jealous, but this isn’t the first tome we have seen Verizon and Motorola offer a special edition only for employees. They did so in the past with the RAZR MAXX and RAZR MAXX HD. The real kicker here is the deal they are getting. The handset is available for $99.99 on a new two-year agreement.

For comparison, the regular DROID ULTRA is priced at $199.99. Sadly though, that is not where the deal stops. Verizon is also throwing in a Griffin Reveal Case, SOL Republic JAX earbuds “and more.” That being said, while the employees are getting a rather nice deal on the handset — they are still left waiting to actually get the handset.

As one would expect, the specs remain the same. Those include a 5-inch HD display along with a dual-core 1.7GHz processor, quad-core graphics, 2GB of RAM, 16GB of internal storage, a 2130 mAh battery (up to 28 hours), 2 megapixel front-facing camera, 10 megapixel rear-facing camera and a Kevlar body with a thickness of just 7.18mm.