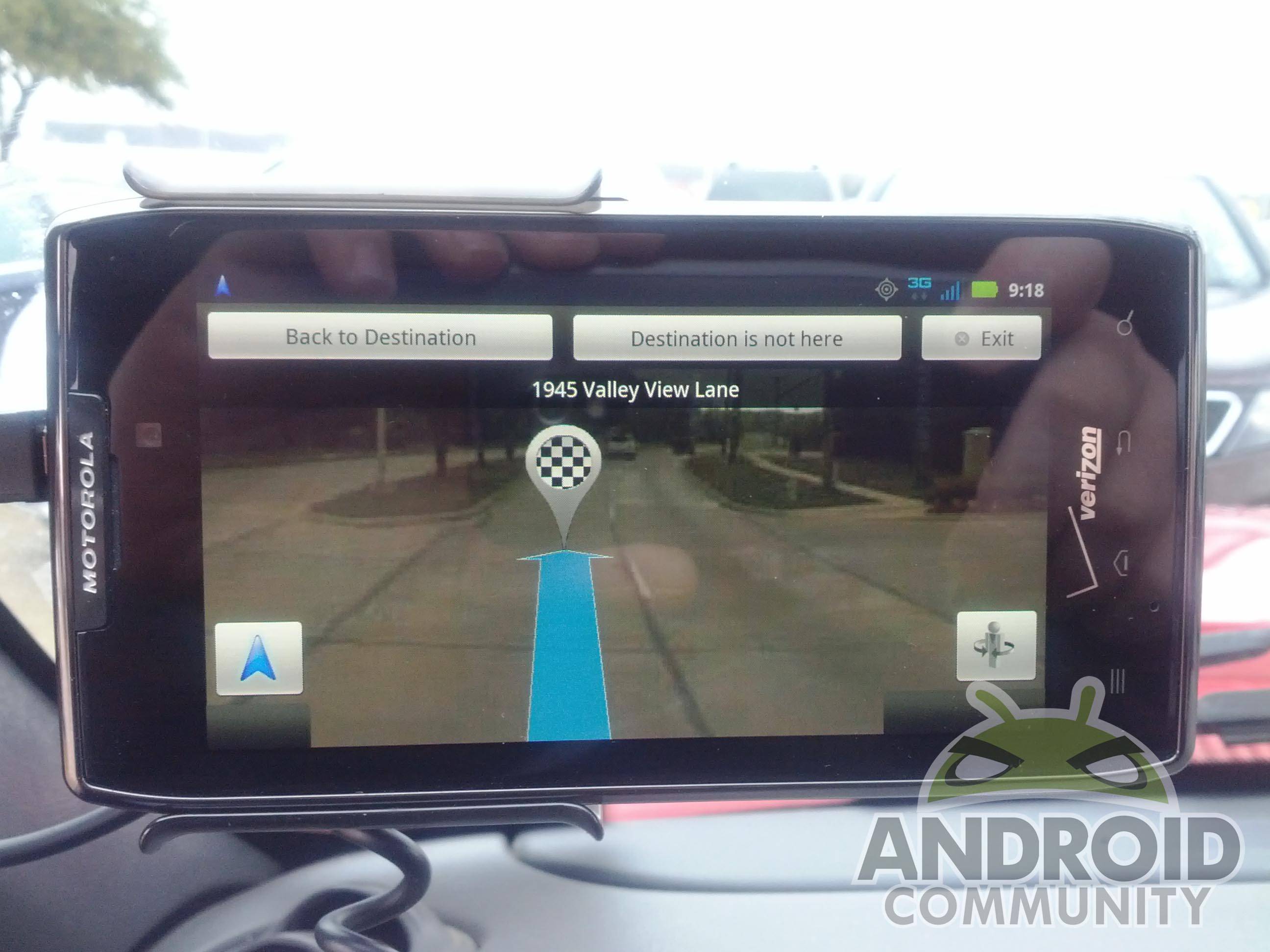 Battery life is a problem for all mobile electronics, and Android is no exception. If there’s one thing holding the platform back from a hardware perspective, it’s the inability for high-powered Android phones to last through a full day without additional charges. There is one exception: the Motorola DROID RAZR MAXX. With its massive 3300mAh battery impressively kept in a housing thinner than 9mm, it’s nothing less than the best combination of power, longevity and high-end components of any phone on the market.

So I decided to test the DROID RAZR MAXX to its limits. From Monday, February 13th through Wednesday, February 15th, I took a three-day business trip from Dallas-Fort Worth to Las Vegas. I took the RAZR MAXX and left its charger at home, as if I had forgotten it. Over the trip I used it as my only phone. I wanted to see if you could use the phone in an “emergency” situation, as if you had no method of getting power into the phone at all. Here’s a log of my experiences.

In keeping with the theme of a businessman who’s aware that he won’t have any access to a charge for three days, I took the precautions that I thought might get me through. I immediately disabled 4G LTE, and made sure to keep away from superfluous browsing and video. I resolved not to use the DROID RAZR MAXX’s tethering function, since they’d kill the battery and I’d have constant access to WiFi anyway. As the beginning of the trip I set the screen brightness at about 20%. 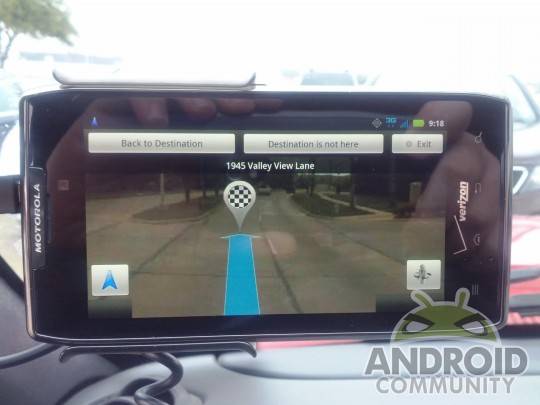 9:18 AM CST – After an hour and a half of driving with Google Navigation and music playing through my truck’s Bluetooth stereo, I took the DROID RAZR MAXX off its charger and dock. This was the last time I plugged the phone into anything for the entire trip. I hopped on the airport shuttle and headed to the gate.

10:04 AM CST – After getting through baggage check and security, I settled down at the gate to do a little work pre-flight. When I checked the battery gauge outside the gate, it still read 100%. I periodically checked my email and random websites over an hour. I boarded and began listening to an audiobook, placing the phone in Airplane Mode when directed. I listened to the book for the entire 150-minute flight, stopping only when directed. I fudged a little and didn’t turn the phone completely off for takeoff or landing – don’t turn me in to the FAA. 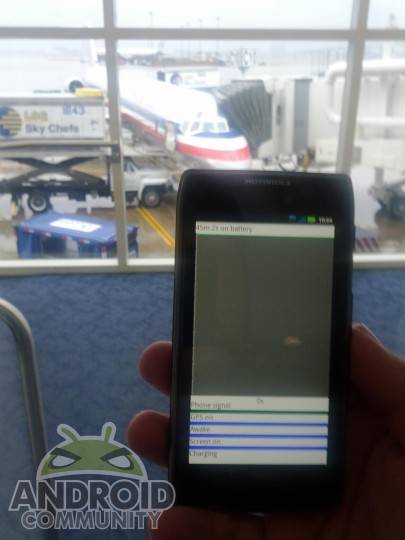 1:16 PM PST: I landed in Las Vegas and boarded the bus to my hotel. This was an intensive period of use, since I was catching up with my bosses and colleagues, and doing some light recreational web surfing. I made a couple of calls to my contacts at the conference. It took over an hour to get to the hotel and check in, thanks to some confusion on the part of the conference organizers.

2:36 PM PST: I get to my hotel room and immediately check the gauge – still 80%. Over the next three hours I made several calls and checked emails and texts, but refrained from strenuous activity like YouTube. After working for a couple of hours in my room, I called some family that was in Las Vegas at the same time to organize dinner – this took some significant time off the battery. I also downloaded some tools for my office workflow. 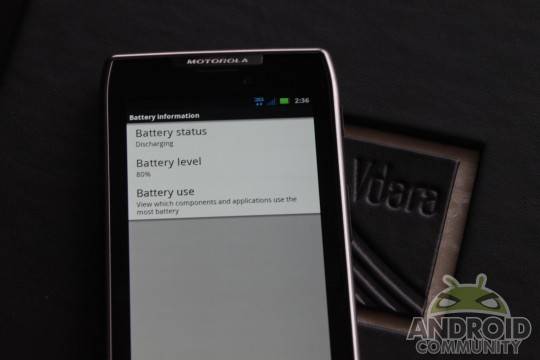 8:31 PM PST: I went to a dinner/open social put on by the organizers of the event in the hotel. Relatively light use was called for as I mingled for a little over an hour. Heading back up to my room, I continued working, then started organizing for the events of the following day. I continued listening to my audiobook as I prepared for bed.

10:46 PM PST: As I hit the sack (at almost 1 AM by my body’s internal clock) and checked the gauge. It read 70% – not bad, considering the strain I had put on it. If it kept up this pace it might make it through.

6:45 AM: I woke up early (thanks to the DROID RAZR MAXX’s alarm clock) and got my gear together, then showered and headed down to breakfast. I was just starting on my coffee before I remembered to check the battery: 60%. Not a good start to the day. 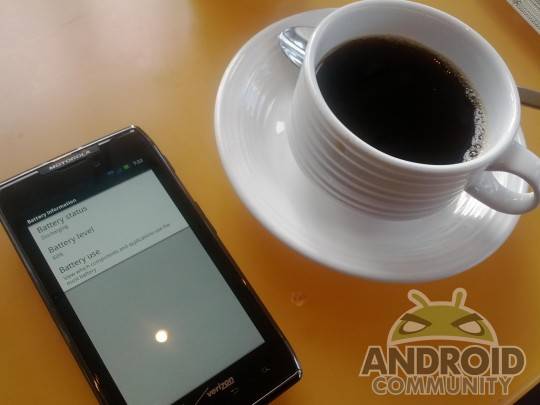 7:45 AM: I went through my morning routine of checking emails, Twitter and Google Reader, firing off a few responses and checking my standard web comics. At 7:45 I headed for the conference’s main presentation. Over the next four and a half hours I checked my phone only fleetingly, looking at emails a half-dozen times to keep up with the trail of emails coming from the office. When necessary I checked the wen for references or breaking news.

12:51 PM: Lunch at the hotel. Another furious session of emails, Twitter and relevant surfing. When I paused to write a quick post, the phone read 40% battery remaining – a poor showing, probably because the phone had to search for signal inside the large Las Vegas hotel’s ballrooms. At this point the RAZR MAXX’s indicator light became a crucial battery saving tool: I began pulling the phone out of my pocket and waiting to see if the light was flashing or not, instead of turning the screen on every time. 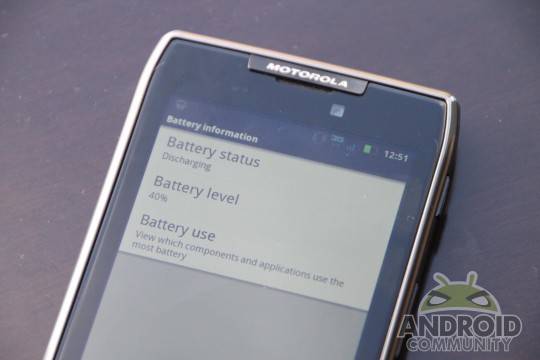 4:15 PM After a series of presentations, I returned to my room to do more work. The battery gauge still read 40%. Motorola doesn’t include more precise measurements in the basic meter, but using Android’s System app I could see that the charge was actually closer to 45%. I worked for a couple of hours, using the phone minimally. At this point I set the screen brightness to 1%, where it stayed for the rest of the trip. Thankfully, the AMOLED panel was bright enough that it didn’t cause problems.

6:45 PM I started the long walk to an adjacent hotel, where the conference organizers had paid for a show for the attendees. It was about a 20 minute walk, so I checked email and a little Facebook while I went, listening to my audiobook as well. One call from a friend came in and we spoke for about five minutes – the only call of the day, in stark contrast to Monday, when I’d had about 8 or 9. At the show the indicator light was a social benefit as well as a battery saver, since I could check to make sure that I had not updates from my bosses without disturbing those around me. 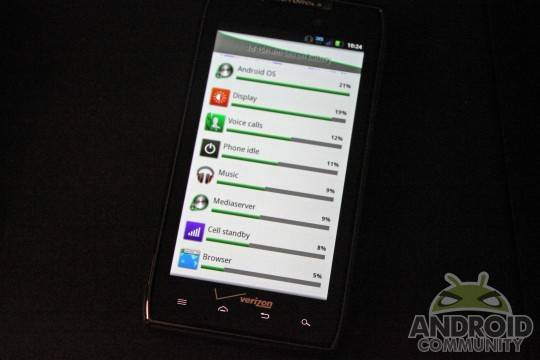 10:23 PM After a couple of drinks at the hotel bar I returned to my room. I did some more work, then listened to my audiobook again as I performed my evening ablutions. When I set the alarm for the morning I checked the phone’s battery: 30%. The phone had been running for thirty-nine hours. While this was indeed some great battery life, things weren’t looking good for my little experiment.

7:00 AM PST: I awoke to the phone’s alarm and a disturbing site: the battery had fallen to 20% in the night, and the gauge finally shifted into the orange mode. When I checked the advanced Settings gauge at breakfast at 8:17, the phone had been running completely on battery for just over two days, and read 22%. To keep the test honest, I checked my email, Twitter and RSS feeds again, as I always do at breakfast. I checked out of the hotel. 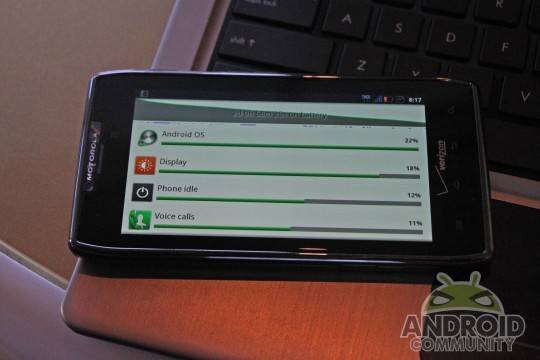 10:16 AM PST: During the morning presentations I kept to my checks using just the indicator light, only turning the phone on when absolutely necessary. I still needed to check emails at least twice an hour, and had to do some quick web research on more than one occasion. When heading to the keynote speech in a large, darkened ballroom, the DROID RAZR MAXX was saved a little grief: I carry a small flashlight in my pocket, and thus didn’t use the phone’s LED light as many might have.

12:46 PM PST: While I was checking Android Community at lunch, the first warning from the phone popped up: 15% battery remaining, connect a charger. This was two days and five hours after I’d taken it off the charger in Dallas. The DROID RAZR MAXX’s Smart Actions kicked in automatically, and I allowed it to disable GPS, but not automatic syncing or updates. Over the next few hours I attended the closing presentations, using my phone as little as possible.

5:04 PM PST: I boarded the shuttle to get to the Las Vegas Airport and checked the gauge: 10%, with another five hours to go at least. Though I wanted to begin my audiobook again, I refrained, only using the phone to check my email. Once at the airport I loaded up Flight Track and checked the status of my return flight. I set the alarm to wake me just in case I dozed off while waiting for the plane. 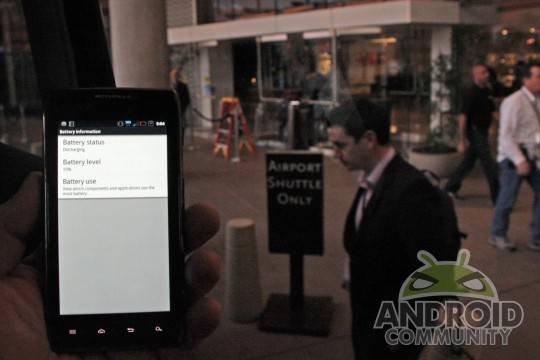 7:30 PM PST: Once I boarded the plane I immediately put the phone in airplane mode, and left it there for the entirety of the flight. Since I was pretty exhausted, I took nap for the duration and left the phone alone, though again I didn’t turn it completely off to keep continuity. The phone still read a 10% charge, and I hadn’t called anyone that day.

12:10 AM CST (Thursday): I landed in Dallas after midnight, then immediately checked the phone. It was still at 10% charge before I re-enabled the cellular data! If I could collect my bags and take the shuttle back to my truck soon enough, I could get through nearly three days of active use without a single charge. Unfortunately it was so late that regular shuttle runs to my parking service had ended, and I had to call them to pick me up at the terminal. When I hung up the phone, the gauge red just 5%, and the battery warning popped up every time I turned on the screen. 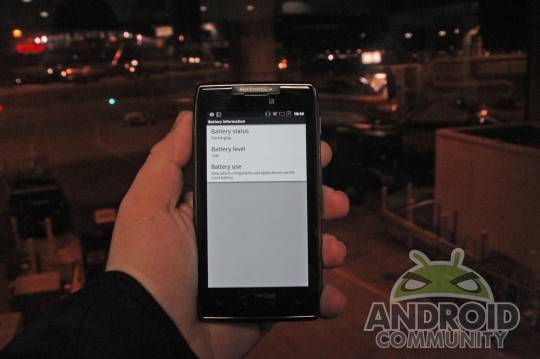 12:48PM CST (Thursday): I resisted the urge to check my phone on the shuttle, except for one email. When I got back to my truck, the gauge read 5%, with the advanced settings graph showing closer to 3%. The DROID RAZR MAXX made it! It lasted two days, fifteen hours and thirty minutes on a full charge. I shoved it in my car dock, then gave it some blessed electrical relief so I could navigate home and listen to some music. 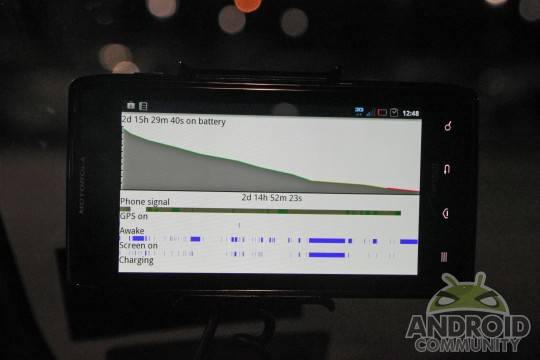 This test isn’t completely realistic – I could have charged the phone via USB at any time, as could any business traveler, and chargers are available at most airports and hotels. I also used some knowledge of Android that not everyone might have, especially disabling LTE. But the accomplishment is impressive nonetheless: I used the DROID RAZR MAXX as my only phone for three full days of communication and mobile web access, if sparingly for the last day.

The phone is not without its faults: large as it is, the battery isn’t removable, so there’s no way to extend that massive run time. I’m also not sold on Motorola’s user interface, especially the launcher. That said, without the Smart Actions app and the battery-saving AMOLED screen, the test probably would have failed. If you’re looking for a smartphone that can go the distance, there’s no doubt in my mind that the Motorola DROID RAZR MAXX is your best bet. If you want a more in-depth look at the hardware, check out Android Community’s DROID RAZR MAXX review.