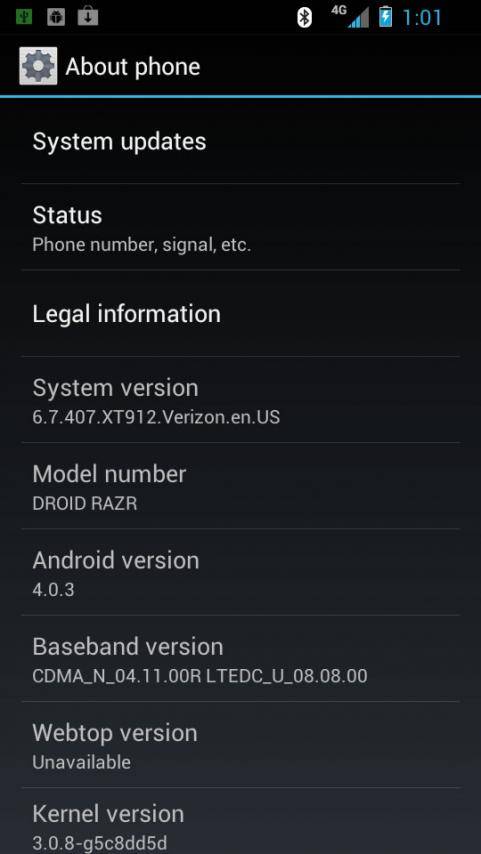 Wondering how Motorola is dealing with Google’s new user interface requirements for access to the Android Market? Wonder no more. A user on the DROIR RAZR forum showed off screenshots that appear to be the Ice Cream Sandwich update for Motorola’s flagship, combining elements of their “don’t-call-it-Blur” custom user interface and the standard Holo theme. There’s no new information on when we can expect the update to hit (hint: settle in for a long wait) but they do show an interesting progression between Blur and Ice Cream Sandwich. This is a considerably different build than the one we saw for the international RAZR.

The biggest change is the launcher, which seems – at least at this point – to be using the stock Trebuchet application. Other than a couple of options in the app drawer, there’s not much to distinguish it from the Galaxy Nexus’ home screen. That’s a huge shift from Motorola’s standard of replacing just about every user-facing app in the phone. We can hope that this means the RAZR and RAZR MAXX will get a more pure experience, but honestly, I’m betting that these images are leaked from an early build of the update, and Moto simply hasn’t migrated all of their custom code to ICS yet.

Since the dialer, camera, and Settings app are all using Motorola’s color scheme and icons, we can conclude that Motorola has no interest in a “clean” ROM, though a lot of the bloatware in the leaked screenshots can be laid squarely at Verizon’s feet. Though some critical features are missing (like WebTop) Moto is using Android 4.0.3, the latest public release, so at least they don’t intend to be far behind when the RAZR and RAZR MAXX get their updates. There’s no official word from Motorola or Verizon on when that’ll happen. Note that technically these could be elaborately faked screenshots, but we kind of doubt it.