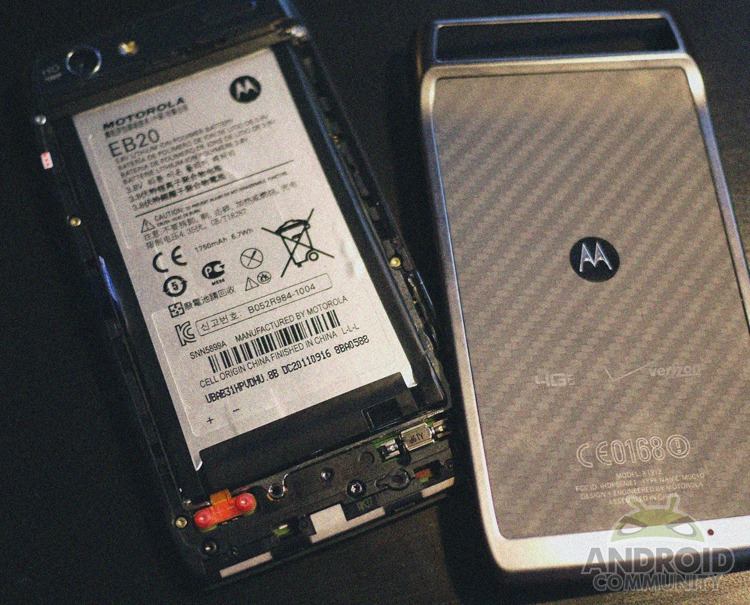 When the new Motorola DROID RAZR was first announced we all quickly learned that the battery was not removable. The back of the device was attached for good, making users unable to remove or swap the battery should they choose. This isn’t a huge issue but many weren’t happy to hear the news. Not to mention the modding and dev community relies on battery pulls somewhat often — I’ve had a few of those moments myself. Lucky for us a loyal reader has just received his shiny new DROID RAZR and tore it down himself to find that the back actually does come off, it just takes a little effort.

We have plenty of photos in the gallery below but in case you missed it the RAZR also received the iFixIt teardown treatment this morning. Sort of revealing what we now have pictures of ourselves. Only they imply you need a machete (or a Dozuki) to open the smartphone while our tipster only used his fingernail and a little bit of arm strength.

Have a look at some notes on how our tipster was able to pop the back off of his/her RAZR with just a bit of effort:

“Hi, I saw that there was an area along the top of the phone where my fingernail could fit, so I wondered if I could actually take the back off, and yes it did come off after just a bit of careful pulling around each of the edges. There are snaps along the whole perimeter as well as glue across most of the battery inside connecting it to the back panel, so you’ve got to be careful since I’m not 100% sure if any part of the back would break if you bend it too much. The back is bendable though, and the Kevlar seems to keep it shape no matter how much you bend it.

The battery underneath is taped in with electrical tape and has a plastic piece over the connector to the phone, so I don’t dare go further than this, but just so you guys know, the battery could be taken out if you really wanted to…” – Figglsticks45

In other words, it appears Motorola really doesn’t want us inside this RAZR thin phone. Our source here notes that they’ve glued the back on quite well and it took more than a few tries to get the Kevlar coated device apart. Once inside, you’ll notice the battery cover actually has rivets or snaps and will nicely click back into place just as any other battery cover. Only they’d rather users not try, apparently, as they’ve been clear in more ways than one that getting into this device will result in a warranty break by you. We didn’t see any VOID if removed stickers on the inside, but the manual had a few. We aren’t going to encourage our readers to try this but sometimes you must do what needs to be done, right?