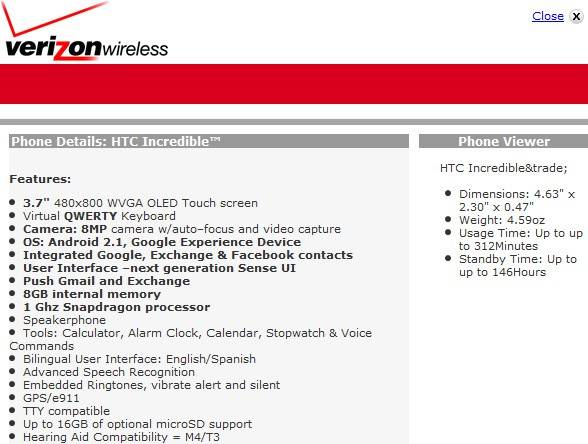 The Droid Incredible, formerly known as the HTC Incredible, has certainly seen a roller-coaster last few months, hasn’t it? From leaked images, to confirmations via Twitter, the device has been painted in one light or another all over the Internet for quite awhile. And, amongst all the rumors, we’ve patiently waited for official screenshots, and, ultimately, the specs sheet. We can finally say that we’ve got the last piece of the puzzle, folks: the official specifications as told by Verizon Wireless proper.

What should you expect come this April 29th? A 3.7-inch 480×800 WVGA OLED capacitive touchscreen, an 8MP camera on the back, Android 2.1 under the hood, HTC’s Sense User Interface, 8GB of internal memory, and that prodigal 1GHz Snapdragon processor running the show. You’ll also get a talk time reported at up to 312 minutes, and a standby time up to 146 hours. Pretty impressive numbers, especially for an Android device, and we can’t wait to see how accurate those numbers are.

We don’t have long to wait before we all get our hands on this bad boy (if you’re going to get one, that is), and we’ve got to admit that having an official launch date makes us feel all warm and fuzzy inside. Or, maybe it’s that 8GB of internal memory, along with that 8MP camera. We’re counting down the days — won’t you join us?