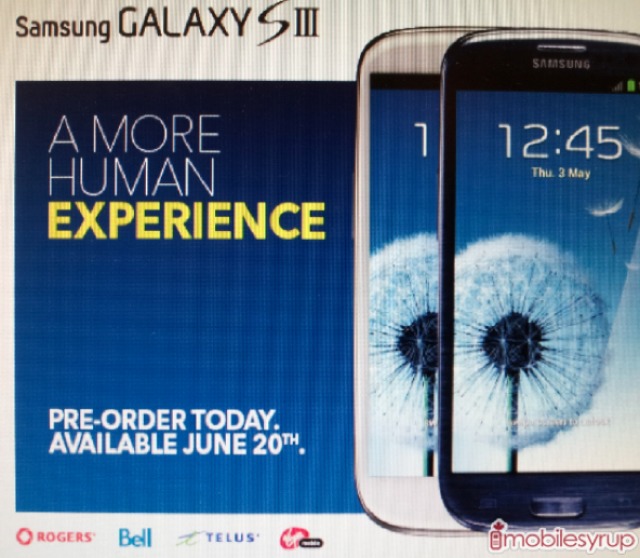 We’re still waiting for a definite date for the Galaxy S III here in the US (on any carrier) but our friends north of the border have a little more information today, MobileSyrup spotted the Galaxy S III in an ad set for a June 20th release, and that’s not the best news: it’s headed for Canada’s own “big four”, Rogers, Bell, Telus and Virgin Mobile.

This is a long way from an official confirmation, but it’s certainly promising. Samsung has said that it intends to  bring its new flagship to the Americas sometime this summer, and that certainly fits, along with the fact that the Galaxy S family has proven popular with just about every major carrier in both countries. We can but hope that Canucks can get their Galaxy S III on in less than a month.

The better question is which version of the phone will make it to which carriers. We know that because of the hardware limitations of Samsung’s Exynos 4 Quad, Verizon’s model (and probably AT&T’s as well) will go with a Qualcomm Snapdragon S4, just as the HTC One X has, in order to operate on LTE networks. Rogers, Bell and Telus all use LTE on limited markets, but Virgin Mobile doesn’t.

The Galaxy S III is set to launch on May 29th in Europe, and the day after in the UK. A few units of the international version are already leaking out in Dubai. There’s still no confirmation of when it will launch in the US, though versions for all four major carriers have been indicated.