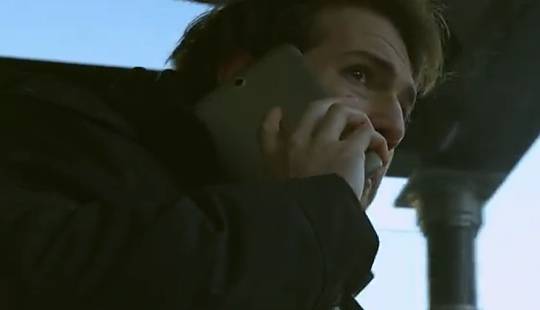 How big is too big when it comes to a smartphone? That is the question here in 2013. With devices like the 5.5-inch Samsung Galaxy Note II being readily available the limits were already being pushed, but this year the lines are going to get blurred even more. Would you hold an 8-inch phablet to the side of your head in public? Samsung and ASUS seem to think so.

While our friend Chris Davies looks great, doesn’t that 7.7-inch tablet look ridiculous in the photo above? That’s what the future holds! Soon you won’t even be able to see our faces. We’ve started to really dislike the term “phablet” and have tried not to throw it around. Sadly now that Samsung has an 8-inch tablet with full phone capabilities and ASUS following suit, that’s exactly what this new generation of devices should be called, as much as we don’t want to call them that.

This week in Barcelona for MWC 2013, Samsung announced the all new Galaxy Note 8 tablet running Android 4.1 Jelly Bean and rocking full phone and voice capabilities. We managed some hands-on with the Note 8, but didn’t put it against our head and make a call — but we should have. Arguably this isn’t a phablet at all. Instead this is a powerful 8-inch tablet for serious consumption and creation with the S-Pen stylus – that just so happens to also be able to make and receive calls should the moment arrive. But is that overkill?

Then there’s rumors that this August Samsung will be announcing their third generation Note smartphone. We’ve heard reports of a 6.3-inch Galaxy Note III with their Exynos 5 octa-core processor and a 13 megapixel camera. Whoa. Enough is enough. Are you excited for the possibly upcoming Note III, or at that point would you rather just get the Note 8.0? It’s a hard question that can’t really be answered til we try them, but we’d love to hear your thoughts.

“Soon you won’t even be able to see our faces!”

Then we had another “phablet” announcement this year at Mobile World Congress. ASUS came out aiming right for the smartphone market, tablet buyers, and Samsung’s pockets with their new FonePad. Now we’re really starting to blur the lines. This thing is a 7-inch tablet (errr fone) that is also a phone. Is it a phone, or is it a tablet?

Does it really even matter? In this day and age a majority of the general public actually doesn’t even use their phones to make calls, and when they do it surely isn’t very often. We’ve all resorted to texting, Facebook and other social networks, and we can’t forget Bluetooth headsets. Now that’s where this argument and need for a phablet actually gains legs. We might as well enjoy large 7-inch and bigger screens full of HD content if we aren’t ever going to make calls. Then the few moments you do need to place a call, just use a headset. This way you get an awesome large screen, yet can still place calls and not have to own two devices.

We also can’t forget about portability, I can’t fit the Note 8.0 in my jeans pocket. And the 7-inch FonePad is pushing it too, but surely many will love the idea and have no problem tossing it in their purse, leaving it on a desk, or carrying it in public. Are you one of them?

The video above shows ASUS really embracing the idea of a phablet, and they seem to have no problems with holding a 7-inch slate up to their ears. We know Samsung is embracing this new market, and the folks from Huawei have a 6.1-inch device too. As we’ve mentioned above there is clearly some advantages and disadvantages to having a phablet, but we’ll just have to wait and see how the market reacts. In all honesty I have a hard time using anything over 4.7-inches, but the Note II has sold millions. So clearly others have no problem with it at all. Why own two devices when the FonePad or Note 8.0 will do everything you need…

It’s an interesting concept that seems to be picking up speed fast. While the iPhone is barely reaching 4-inches and other competing platforms staying around 4.3, Android is leading the charge. Will 2013 be the year of phablets, or will you stick to smaller smartphone? Is the DROID DNA at 5-inches the sweet spot, or are you willing to go bigger? How big is too big? Let us know in the comments below.