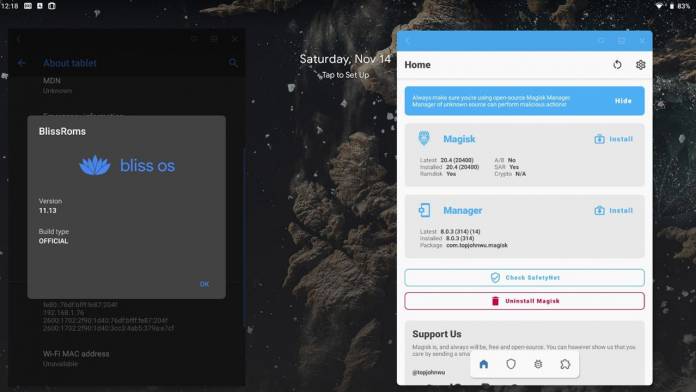 After releasing Android 10 beta of Bliss OS for x86 PCs, Team Bliss has now managed to add support for ARM64 Emulation and Magisk in way of a new update. The platform will allow Android apps to run smoother with mouse and keyboard based computers. We know that Microsoft is working on bringing Android apps on Windows 10; in the same spree, Bliss OS has been updated to versions 11.12 and 11.13 that brings support for Magisk and ARM64 to make Android apps widely available on x86 PCs.

The report was first published on XDA Developers, which suggested that a recognized contributor Jon West a.k.a “electrikjesus” took to Twitter to announce the new update for the Bliss OS open-source operating platform. This new update as informed brings support for Android Architecture – ARM64 and Magisk.

You all asked, and we delivered. Announcing new Bliss OS 11.x builds that bring ARM64 emulation, Gearlock updates, and even Magisk to the mix, as well as a ton of other things. Be sure to checkout the update post on @xdadevelopers, https://t.co/anqFUOAjEP pic.twitter.com/EWjESqXToF

The new Bliss OS update will allow x86 computers to run Android apps. According to Jon, the platform can run Android apps and games including PUBG Mobile and Among US. There’s a caveat – while the Bliss update supports Android ARM 64 apps, several “armeabi-v7a” apps may face issues at the moment.

Here are just a few of the games we've tested so far on the new Bliss OS 11.x builds with ARM64 emulation @theetaprime , you should try these builds out on some of your stuff soon 😀 pic.twitter.com/tjfpW9J22J

Bliss OS has been confirmed to have updated to the new 11.12 and 11.13 versions. Jon West however also teases a new software version for the Bliss OS as coming soon for computers – this is supposed to be based on Android 11. There is no information about when this would be released.