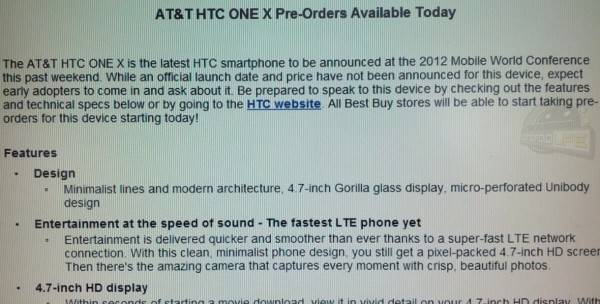 The HTC One X stole the show yesterday at Mobile World Congress, as HTC showed off their new ‘hero devices’ for 2012. All three looked extremely nice, and going back to the aluminum unibody as we saw in the HTC Legend a while back was a nice touch. As you know, HTC will launch two version of the One X, an international version, and one specially designed to take advantage of AT&T’s 4G LTE network. It seems Best Buy has already jumped to pre-orders for the device, and it’s sure to get some attention.

To pre-order your device, just walk into a Best Buy and reserve your One X for $50.00. You’ll get that back of course, unless you decide to take your name off the waiting list. This AT&T version will sport a dual-core Qualcomm Snapdragon 4 processor instead of the NVIDIA Tegra 3. This was purely due to LTE incompatibility on the Tegra 3, or else we’d probably see it included on both versions.

The HTC One X will ship with Android 4.0 (Ice Cream Sandwich) skinned with HTC Sense 4.0, so depending on when it’s finally released, it may have the latest version of Android for at least a little while. Android 5.0 is quickly approaching, so we’ll see how quickly HTC will be able to update these devices to the latest. They were the most prestigious Android manufacturer for quite some time, so let’s see if they can pull it together with this new strategy and offer its customers the best experience possible.