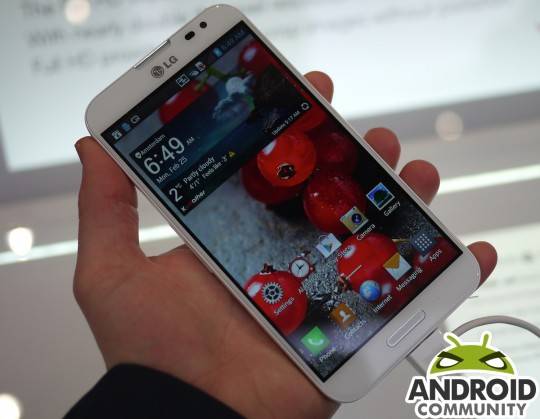 This latest FCC filing does not specifically mention the Optimus G Pro, however it does mention the LG E980. The key here though, the LG E980 is believed to be the AT&T version of the Optimus G Pro. Given we have already seen an official announcement, not to mention, spent some hands-on time with the handset — lets get into the parts about this being a model for AT&T.

That part is basically that the Optimus G Pro has LTE coverage. Or more specifically, that this FCC filing shows support for LTE on the bands that would be required by AT&T. In addition to the LTE connectivity, the handset is somewhat of a powerhouse and is sporting a 5.5-inch 1080p display and powered by a quad-core Qualcomm Snapdragon 600 processor. Other goodies include Android 4.1 Jelly Bean, a 3140 mAh battery and 2GB of RAM.

The Optimus G Pro is also not lacking on the camera. The handset has a 2.1 megapixel up front and a 13 megapixel rear-facing camera. Anyway, with this FCC filing out of the way it looks like the next bit of news that we need to see is from AT&T. We look forward to seeing when they plan to release the Optimus G Pro and also what the price point will be.

This release, combined with the HTC One, Samsung GALAXY S 4 and maybe even the Galaxy Note III and it is looking like this will be a tough year when it comes to picking (and sticking with) a smartphone. The Optimus G Pro was on full display back in February during Mobile World Congress and we managed to spend a bit of hands-on time with the handset, which you can check out right here.