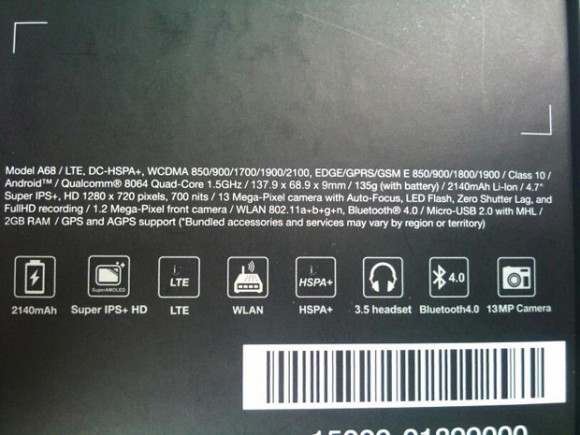 Just yesterday we were told that ASUS would be launching the PadFone 2 on October 16. However, we still weren’t given any solid details about the product itself, but thanks to a leak, we’re given access to the full specs of the PadFone 2. And we have to say, they look pretty good.

We knew the upcoming tablet would be given a quad-core processor and 2GB of RAM, but that’s really all we truly knew. Now we get to see all the specs of this beautiful device, thanks to a photo taken of the back of the box.

It’ll be running Qualcomm’s Snapdragon S4 Pro processor clocked at 1.5 GHz, 2GB of RAM, a 13 MP rear camera, Bluetooth 4.0, a 2140 mAh battery, and a 4.7-inch Super IPS+ HD display with a 1280 x 720 resolution (although it also says Super AMOLED, so we’re not sure which one yet). All of this weighs in at only 135 grams and is a mere 9mm thick. These are certainly respectable hardware components that we can’t wait to see in action.

The only thing that really remains a mystery is price and availability of the PadFone 2. We’ll just have to wait patiently until October 16 when ASUS gives us the complete details. Until then, it’s nice to know what we’ll be dealing with before the device is even out yet. Here’s hoping that ASUS will send the thing over to the US for us Americans to dabble with.