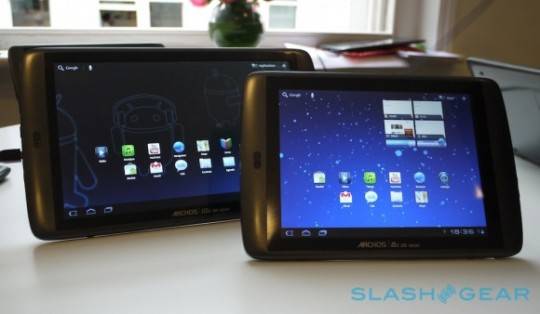 Back in late June, we spent a bit of time with the Archos G9 tablet. At the time, we knew all there was to know about the Archos G9 and its sibling with a vague launch date of “this fall” and a price pegged at $279. We know for instance that the G9 will run Android 3.1 and will be offered with up to 250GB of storage. The tablets also both have the option of a 3G USB dongle to get mobile broadband on the go.

The tablet uses a dual-core TI OMAP 4 processor that we found to be slow compared to the Tegra 2. That TI processor under the Archos G9’s hood runs at 1.5GHz. The devices we played with were prototypes so we are hoping the performance is better in the final versions. At the time, the price was pegged to start at $279 with the base 8GB of storage. The tablet has gone up now that it has a September launch date. The G9 80 with the 8-inch screen will start at $299.99.

The G9 101 with the 10-inch screen will start at $369.99. There is no word on what the version with 250GB of storage will sell for. With the higher prices and no corresponding bump in features, I wonder if the G9 tablets will be as appealing to consumers on the hunt for a new tablet. What do you think? Are these tablets worth the bump in price?