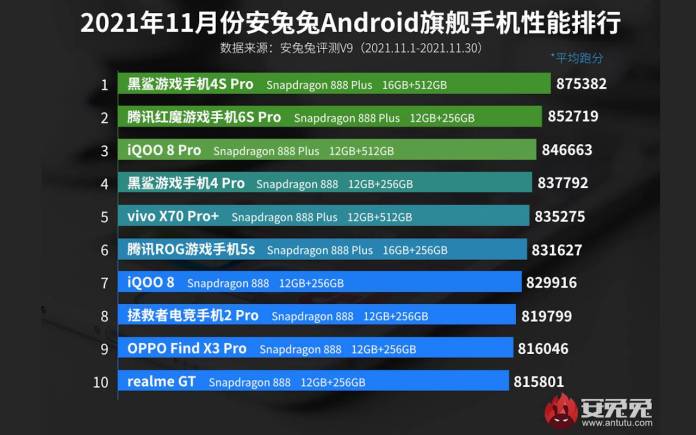 Most people are curious as to what are the latest best-performing Android phones in the world today, at least, if we are to look at benchmarked scores. It’s not just because it’s year-end but because there are too many choices out there. Antutu Benchmark has recently released a list of the best phones in China, at least, for November 2021. The list includes phones also released in other markets around the world. Most of the phones in the list were also part of the October 2021 rankings.

Note that most of the phones in the list are powered by either a Snapdragon 888 or Snapdragon 888 Plus processor. The top performing Android smartphones for November 2021 are as follows (in order): Black Shark 4S Pro, RedMagic 6S Pro, iQOO 8 Pro, Black Shark 4, Vivo X70 Pro+, ASUS ROG 5s, iQOO 8, Lenovo Legion Phone Duel 2, OPPO Find X3 Pro, and Realme GT.

With more premium phones being introduced the past few months, we can expect the list will change next month. A number of phones will be replaced by new Android phones that have been out or are yet to be revealed in the coming weeks.