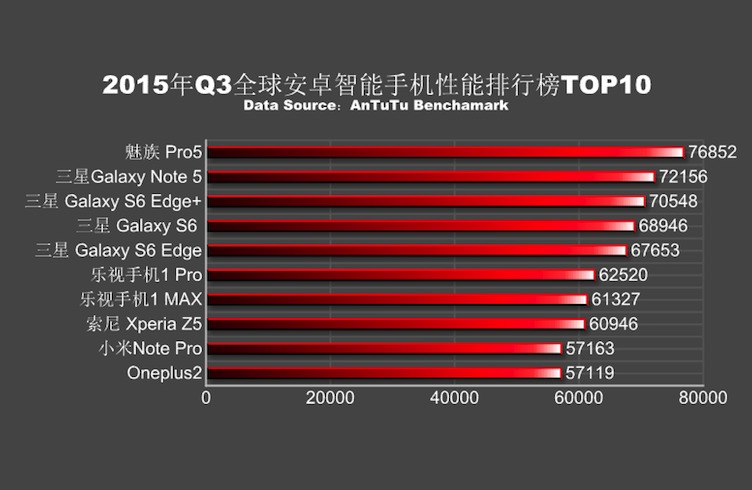 Now that we’re approaching mid-4th quarter, we’re still interested to know how smartphones fared last quarter. When it comes to the Chinese market, we already know that Huawei is the new King, beating Xiaomi for the first time. But what about the global performance scores for mobile processor? We’ve looked at the AnTuTu Benchmark rankings and learned that the Samsung Exynos 7420 64-bit octa-core processor is the best so far.

A number of phones powered by the Samsung Exynos 7420 chipset ranked well last quarter. A few devices are equipped with Qualcomm Snapdragon 810 processor but Exynos still has an advantage. Data for Q3’s benchmark readings are from the period of July 1 to September 30. Performance data are uploaded by mobile phone users all over the world. Average score for each of the same series or model using the same chip are ranked and analyzed.

The latest AnTuTu list has the Meizu Pro 5 on top of the list with scores more than 76,000 points. It’s the first non-Samsung phone to run an Exynos 7420 processor. Android smartphone also boasts of a 1080p display so you know it’s really one of the best in the market today. The Pro 5 is joined by the latest Samsung premium smartphones–the Galaxy Note 5, Galaxy S6 Edge+, S6, and the S6 edge.Completing the top ten include Le 1 Pro, HTC One MAX, Sony Xperia Z5, Xiaomi Mi Note Pro, and the OnePlus 2.