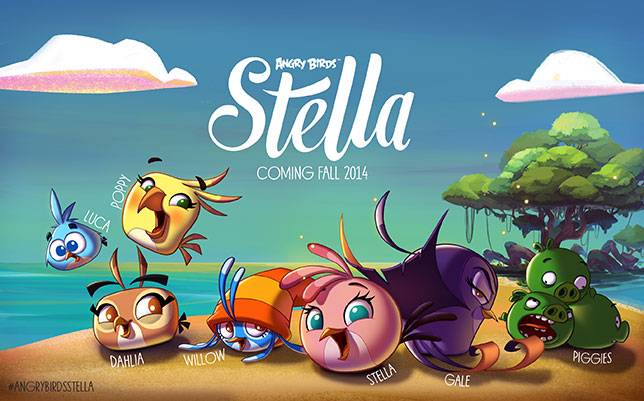 Like it or not, another Angry Birds game is coming to town. This time with the promise of more identifiable characters, more cross-merchandising, and more stuff to spend money on. Angry Birds Stella will take you to the heights of Golden Island as you take Stella and her brave, or crazy, avian friends to battle against former friend and now mortal enemy Gale, a.k.a. bad princess, and her horde of, well, green pigs.

Angry Birds Stella was announced as far back as February last year with a promise to break the mold and introduce birds with real character and personalities. Of course, those might not be easy to glean from a game that is really all about throwing around bird balls to burst pigs seated on precariously constructed edifices. That said, Stella and her friends will supposedly exhibit different powers based on their particular personalities. Luca, the youngest of the group, is supposedly easily riled up when called a baby. Naturally, his special move is called Soundwave Shock. Stella herself is depicted as athletic and fierce, so she moves fast, especially with her Pink Flash move.

Naturally, Angry Birds Stella will not just be limited to a game, so we’ll get to see all kinds of merchandise sprouting around it. What’s new, however, is the fact that there will also be an animated series based on the game. The show will start airing in November, and the first season will be comprised of 13 episodes, each shown weekly. Angry Birds Stella itself will launch September 4.

In the meantime, we are also waiting for word on another Angry Birds game, Angry Birds Transformers. This one was just teased in June, so we might not see it until much later. A teaser video was released in time for Comic Con last month, but it doesn’t exactly give any hint to the planned gameplay for this brand crossover. Rovio has proven itself capable of really breaking the mold and breaking away from its staple physics-based gameplay mechanic, with Angry Birds GO racing and Angry Birds Epic RPG. Here’s to hoping that Angry Birds Transformers will also be something different, and not just a rehash of the same old game, only with avians in disguise.