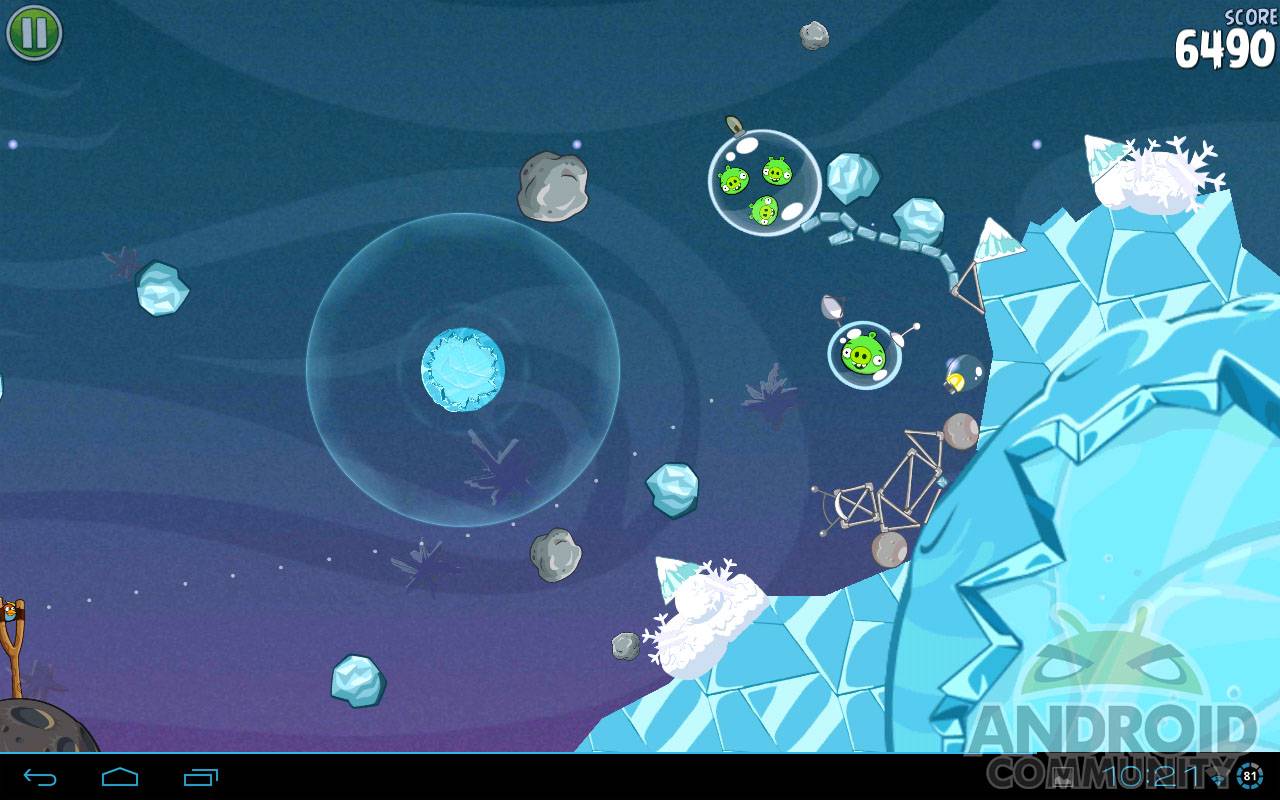 It’s finally here: the avian outer space destruction simulation that’s been on the minds of Bird-brains for weeks. Angry Birds Space represents the first major revision to Rovio’s familiar formula since the game launched – unlike the various Seasons themed updates (with the occasional extra bird thrown in) Angry Birds Space shakes up the equation with physics-based levels and puzzles, forcing players to account for areas of low, zero and radial gravity in order to smash those thieving pigs. Does Space live up to its world-conquering predecessor? Read on to find out.

When you start Angry Birds Space, you’re presented with the familiar formula of slingsh0t-based carnage with only one twist: the playing surface is now an asteroid that curves aroung 360 degrees. No problem, right? Just aim for the prize and don’t overshoot, like always. Until the first time that you do overshoot, or zip right through the pigs’ hastily-built constructions, and keep going in a deteriorating orbit that slowly spirals down to the planetoid. This is a bird of a different color.

Through the various levels you’ll encounter pigs and obstacles free-floating in space, where a direct point-to-point trajectory can hit home on the first go. But there’s also free-floating debris, some of which generates its own gravity field (the white bubbles you see around the asteroids in the screenshots). You can use these bodies to curve your otherwise straight flight path, shoot down to the asteroid for some standard destruction, or bump the pigs’ flotillas into the nearest gravity field to give them an up-close and personal introduction to the ground. There’s a staggering array of ways to accomplish your goals, and the familiar methods aren’t always the best. 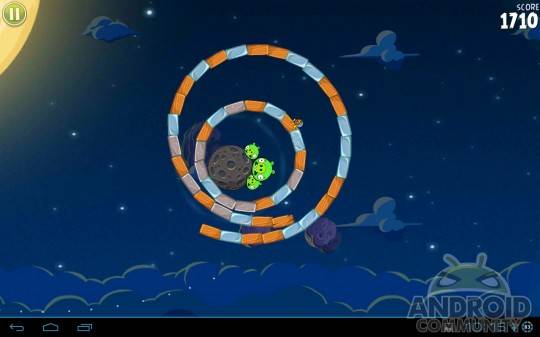 Then there’s the birds themselves. The red, blue and black birds behave pretty much as they always have, with the addition of straight flight in zero gravity. (Also they get some Buck Rogers in the 25th Century-themed costumes.) The yellow bird is now the “Lazer Bird” in a fetching shade of purple, and alters his path once during flight while speeding up. The Ice Bird smashes into any structure and turns a good portion of it to ice ( the Angry Birds Space equivalent of glass) and the the inexplicably named Terence (green bird) has a huge amount of mass for getting through multiple formations or big piles.

While the Space gameplay will be familair to anyone who’s played the original, there’s enough new material and flexible gameplay to keep even the most saturated of fans coming back for more. The gravity and physics makes new options possible, while creating an environment for puzzles and triggers that makes you want to play some levels over and over. This really is a significant addition to the simple game, enough that those who’ve skipped the last year’s worth of expansions will want to check out the differences. 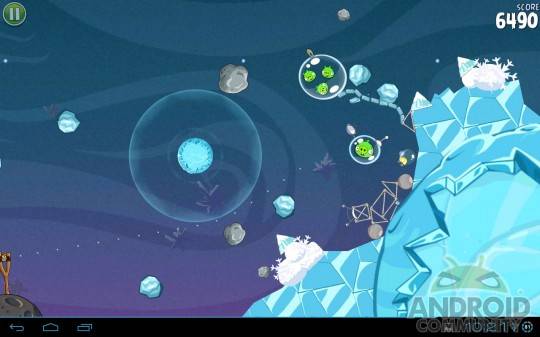 It isn’t perfect. While playing on my Galaxy Tab 8.9 with its 720p resolution, the cinematic and field itself is shrunken somewhat; on Android at least, the UI needs a little tweaking to be ideal. Owners of 720p phones and tablets of any size should download Angry Birds Space HD. On more than one occasion I actually pushed pigs outside of the playing area without smashing them – presumably they were just hanging in space, awaiting bird-based death that never came. And for all the new gameplay tweaks and great sound design, the graphics still leave a lot to be desired – just about any Android device can handle the game, but it’s not pushing any boundaries in the technical department.

If you’ve got a Samsung Galaxy Note (which I don’t), you get access to 30 exclusive levels of the game that are off-limits to other Android devices. There may be even more than that – while playing through one of the Golden Egg levels I spotted an emblem with the Galaxy Note and its S-Pen, presumably a hidden treat for owners of the premium hardware. 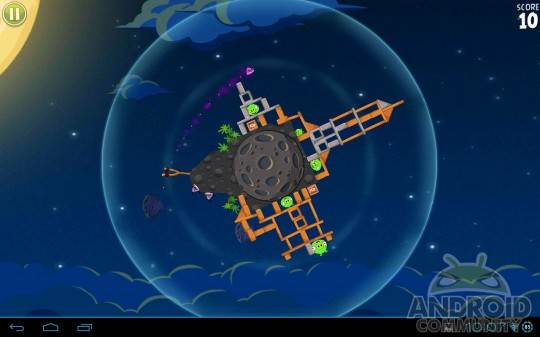