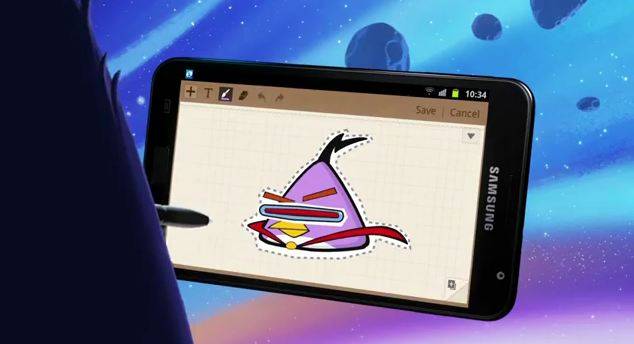 Angry Birds is nothing short of a sensation, and Samsung isn’t above exploiting that fact to make their Galaxy Note superphone look that much better. On that note (ba-dum bum) they’ve announced a partnership with Rovio to bring 30 extra levels of Angry Birds Space to Galaxy Note owners when it launches on March 22nd. You hear that, Angry Birds fanatics? All you have to do to play 30 extra levels in a free game is to buy a $650 smartphone. Just hand over your money now.

The “Danger Zone” levels are normally an in-game purchase, though since Angry Birds has always been free on Android, it’s not clear exactly how (or if ) non-Galaxy Note Android players will be able to access them. Samsung also mentions the Lazer Bird [sic], which ” reflects the personality of Samsung GALAXY Note. The bird’s lazer vision resembles the best viewing experience on the crisp and expansive screen and its lazer strike super power the high performance.” So apparently a bird that can fly through space and shoot lasers out of its eyes has a lot in common with a 5.3-inch smartphone. Somehow.

This isn’t the first time that Samsung and Rovio have partnered for some joint promotion. Back in December, the  Angry Birds used a Note to send some seasonal destruction towards the pigs. On a related note, the announcement was made at SXSW in Austin, Texas, so that rumor about a Galaxy Tab 11.6 reveal was optimistic to say the least.