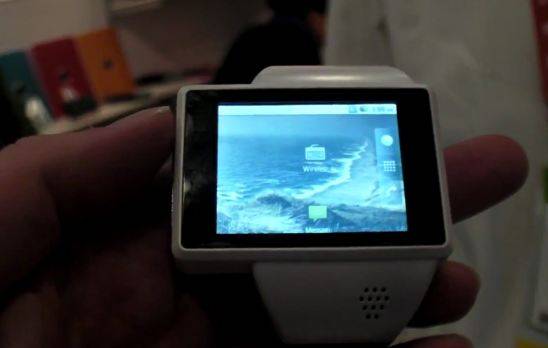 Between the WIMM One, I’m Watch, Sony Ericsson’s new Xperia SmartWatch and the MOTOACTV, you’d think there was some kind of trend going on. Add one more to the pile with niche Chinese OEM Phaeton Nice Electronics and their unnamed Android watch, which ARMDevices got a look at on the CES floor. But wait a minute – this is more than your typical Bluetooth-pairing, agenda-updating fancy pedometer: this device runs a full and mostly unmodified Android 2.2 OS with a cellular connection.

That makes the watch-phone, well, an actual phone, and piques our interest considerably. You’ll find all the standard budget Android bells and whistles shrunken down to fit on a 2-inch screen, including a 469Mhz processor, 800mAh battery (claimed battery life: 1.5 days) and SIM and MicroSD card slots. While the phone only supports EDGE data speeds at the moment, the manufacturer hopes to get it up to 3G by the time it finds some distribution partners. A camera faces forward instead of up so you can sight along your arm for photos. The 320×240 screen is actually pretty high-res for its size (the HTC Wildfire had the same at 3.2 inches) and uses capacitive touch technology.

Pricing is only good for distribution partners for now, and starts at $200 each for orders of 500 units. Like many smaller Chinese OEMs, Phaeton Nice Electronics has no plans to start selling the watch directly. As interesting as the idea is, we’ve seen “dumb” watch phones for years, and the execution never quite lives up to our Dick Tracy dreams. For one thing, holding your wrist up to do some mobile computing has never appealed outside of the comic books, and a design like this demands satellite devices like a Bluetooth headset and/or headphones. One the plus side, the company teased an updated model with a faster processor and Ice Cream Sandwich to come.