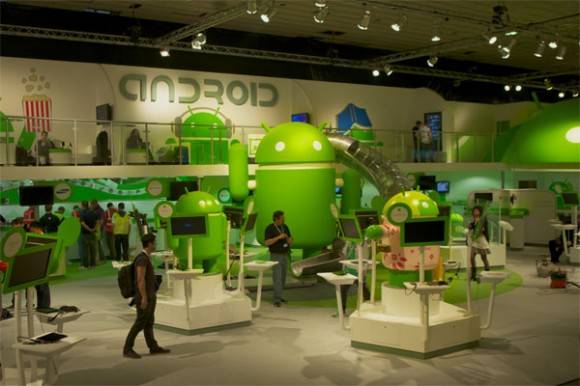 As previously indicated, Google’s Android booth at Mobile World Congress is pretty amazing. But it’s not all slides and pins: the company took the opportunity to interrupt full-grown tech journalists embracing their inner child for long enough to drop the latest numbers detailing Android’s meteoric rise. First up, Android has now passed an average of 850,000 new phone and tablet activations every day – and that’s just the number that Google keeps track of through its own apps and servers. It’s a growth of over two hundred and fifty percent since MWC 2011 a year ago. Anyone want to start taking bets on how soon it will reach a million?

Second is the number of available apps: 450,000 in the Android Market alone, with more than a billion app downloads a month. While that doesn’t quite beat the iOS app store, it’s closing in, and analysts predict that it will pass Apple some time in the first half of this year. And really, once you load up 100,000 apps on your 32GB SD card, how many more do you need? Some would disagree – you only need to glance at the comments in our latest Temple Run article to see how iOS disparity is affecting perception. Also, shame on you, commenters – you text your mother with those fingers?

As far as devices go, more than 800 phones and tablets running Android have been produced since the good ol’ G1 way back in 2008. (At least 650 are made by Samsung.) The total number of Android devices sold around the world have reached more than 300 million – almost enough for ever man, woman and child in the United States to have one. If you happen to be at Mobile World Congress, make sure and stop by Google’s Android playground – you won’t be disappointed.