Another month, another look at the distribution numbers for Android versions. Android Nougat is still king of the hill, and usage for Android Oreo is slow in growth. Consider it a testament to how great Nougat has been as an Android version that people are finding Nougat pretty much enough for what they need on a day-to-day basis that they find no pressure at all to jump either to a manual update to Nougat (via custom ROM or other wise), or get a brand new 2018 smartphone with Oreo inside.

As we see from the numbers from the month of May 2018, Nougat usage has grown by another percentage point or so, coming to 31% on the month. Android Marshmallow is the closest version in terms of usage numbers, with Android 6.0 getting around 25.5% of the whole Android user market. Android Lollipop numbers continue to drop slowly, with usage at 22.4% (from last month’s 22.9%). 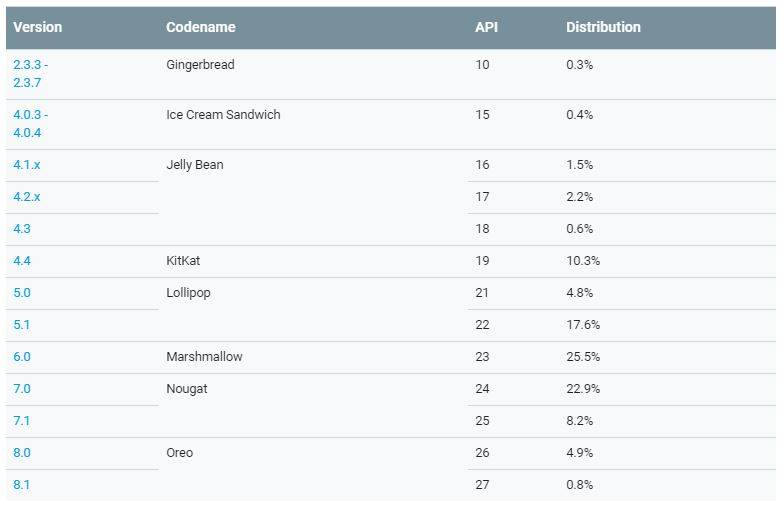 By the end of 2017, Nougat was still trailing Marshmallow, but growing steadily by adding 2 to 3 percent on a monthly basis. It was in February this year that Nougat finally overtook Marshmallow and never looked back. From February to April, though, the usage of Nougat has slowed down in growth, only adding 2 percentage points. From April to May, we see only a growth of 1 percentage point. We might be seeing the beginning of the rise of Oreo in the distribution table, but we expect Nougat usage to still grow until Q3 of 2018.

Adoption of Android Oreo on the other hand has been slow, and again we credit that to how good Nougat has been. At the end of 2017, there was less than 1% of the Android market using Android 8.0. By February, Oreo hit 1%, giving you an idea of how slow the climb has been. Fast forward to May 2018 and we’re looking at 5.7% usage in the Android user market. This will be the result of all the new Android smartphones sold in the first half of 2018. Expect faster growth as the bottom half of the year rolls in and more people buy Oreo-powered devices.

At the bottom end of the table, there are still users who are not throwing away their devices powered by Android Gingerbread and Android Ice Cream Sandwich. The numbers have been pretty much the same from February to May, but we will probably be saying goodbye to one of them in the next few months.