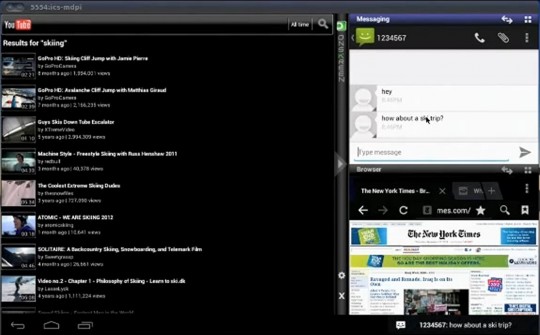 Starting off today’s top stories, Onskreen Cornerstone has brought windowed apps to Android tablets. It’s hard to believe the feature wasn’t already built into the OS. It looks and works just like windowed applications in Linux, Mac OS X, and Windows. Now you can have your Facebook open, while chatting through Google Voice, and then surf the net all on the same screen.

Next up, we had HTC slate a timeframe for updates to Ice Cream Sandwich. They will begin sometime in March, and the Sensation will be first in their lineup. As for Motorola, an executive has let us know that hardware is to blame for their slow software updates. After all, with such a huge jump from 2.3 to 4.0 – we’d all rather receive a ‘bugless’ update later than one with constant crashes now.

It seems Samsung has trademarked the name ‘Samsung Galaxy Camera’. Could they really be planning a release for an Android powered camera? Using Android for solely picture taking purposes is rather unique thus far, and could potentially do very well. It would be nice to install one of many photo editing applications straight from the Android Market onto a decent camera.

And finally, be sure to check out Google Music’s ‘Best of the Grammys’ sale. They’re offering $3.99 albums and $0.59 single tracks. That’s over 50% off for relatively new hits, so grab them while they’re extra-affordable!