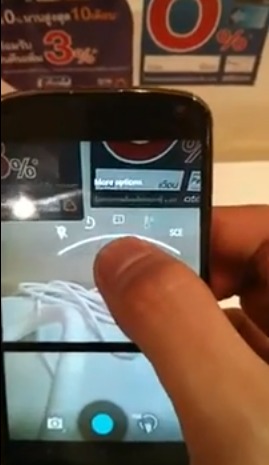 Today we’ve received potentially our first look at Android 4.3 Jelly Bean. A set of pictures leaked from the folks over at XDA showing an LG Nexus 4 with Android 4.3 at a mobile trade show. Luckily for us another leakster was also able to snag multiple photos and a video of the new camera UI. That’s just one of many new improvements we’re expecting too.

We still don’t know exactly what Google has planed for their small update from 4.2 to 4.3 Jelly Bean, and we’ll be waiting a while longer to see the next generation of Android with Key Lime Pie. After nothing was revealed at Google I/O we’ve all been wondering what was coming. At least we’re getting a small glimpse today though.

The video seen below is a short clip and sadly all we really get to see in depth is the new camera UI. It briefly shows the homescreen and app tray but nothing appears too different from what we’re used to today. This comes to us from someone else at the show, so obviously this newly updated Nexus 4 is real, and out in the open getting seen by many. Take a peek.

In the old camera UI you could hit the settings button, or just tap and hold on screen for a circle of options. It was somewhat intuitive and certainly better then scrolling and thumbing through menus. Now with this newly improved design it’s even better. Similar to the gesture up for Google Now on stock Nexus devices, a drag will enable all the options you see. It’s simple, quick, easy, and pretty intuitive if you ask us.

There’s a new timer options, snazzy new icons and information for HDR, and a few other things. Sadly the leakster didn’t go through all of the options to give us a better idea, but hopefully Google will reveal all the details soon enough. Now if only that June 10th rumor turns out to be true. Keep your fingers crossed!