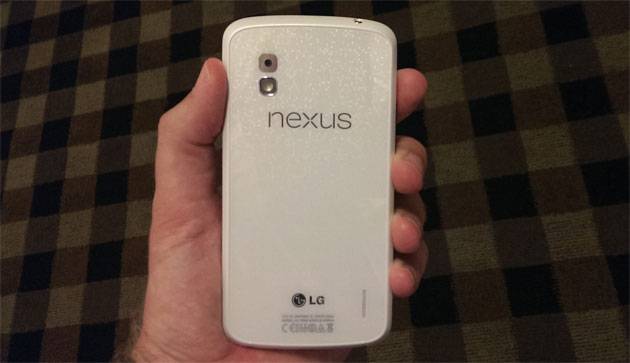 We heard a lot of rumors and chatter leading up to Google I/O this year. Many were saying Android 4.3 or 5.0 Key Lime Pie, a new Nexus 7, and even reports of a 4G LTE powered Nexus 4 for all carriers. However, as you all know, this year went very different from years past. Google focused on developers, and didn’t drop a new version of Android, or any new hardware. Don’t worry though because good things come to those who wait.

Leading up to Wednesday there was also multiple reports and videos that surfaced of White Nexus 4 smartphones, and the rumor was that it would be what Google used to show their latest version of Android with. Well, now those rumors are back because a White LG Nexus 4 was found here roaming the halls of Google I/O, and the story along with it is quite interesting.

As it goes, according to Android and Me, is that Google will be releasing Android 4.3 Jelly Bean along with a white 16GB Nexus 4 in June. On June 10th to be exact. According to the report it will be the same Nexus 4 we know and love now, in white, and with the newest OS changes from Google. There’s no mention of it supporting 4G LTE like rumors have suggested, but they didn’t rule it out either.

To many of our surprise, Google didn’t announce Android 4.3 or any new version of Android yesterday. Apparently they wanted to focus solely on developers and will drop all this other news soon for the masses. They intentionally dropped it from the show, pushed the keynote into one long 3 hour session instead of 2, and will reveal it all at a later date.

We’re not really sure what to think about the report, but we’ll just have to wait and see. Nothing has leaked regarding Android 4.3 as far as features or changes, but surely it’s coming, we just don’t know when. If the details revealed here at I/O are any indication, we could be having a pretty fun few weeks in June as this all rolls out to the Nexus 4, and all other Nexus devices. Stay tuned and we’ll update when we learn more.

SOURCE: Android and Me