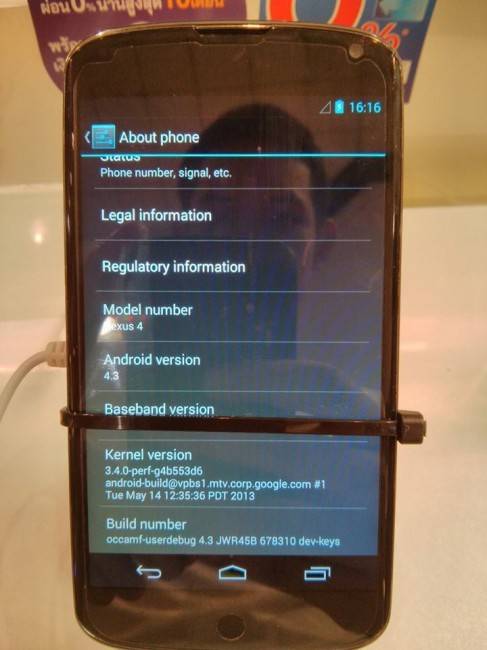 We’ve been hearing a lot about Android 4.3 Jelly Bean lately, not 4.5 or 5.0 Key Lime Pie, and today over on XDA is possibly the first leaked images of the latest OS from Google. As the story goes an LG Nexus 4 was spotted at the Thailand Mobile Expo running Android 4.3 Jelly Bean and luckily one reader was able to snag a few photos.

The pictures were plastered up on XDA this morning and gives us more than a few tips as to what is coming next from Google. We clearly see Android 4.3 Jelly Bean as the OS, with a build date being May 14th, so it’s a pretty new updated version. Then the build number is listed as JWR45B. Exciting right?

He was able to snag multiple photos of the about section, the camera interface, as well as a few of the Jelly Bean easter egg feature we know all to well. Sadly that’s all we get to see. He wasn’t able to take more photos of the OS, so any major changes are still unknown at this point. However, it’s worth noting the changes to the camera UI quick settings are neat the bottom, similar to Google Now’s pop-up on stock Android.

Another thing worth mentioning is the build number. Being JWR45B here, when previous reports were JWR23B, and even 39 at one point. This shows Google’s been working hard on Android 4.3, and it could be nearing the final stages in preparation to be rolled out to Nexus devices and officially released.

It’s a quick sighting, one that can’t even be confirmed, but it looks pretty legit if you ask us. The images were posted on XDA and that’s all we have so far. No other details or information has been provided. Now we’ll just have to wait and see if Google releases this on June 10th like previous rumors suggest.