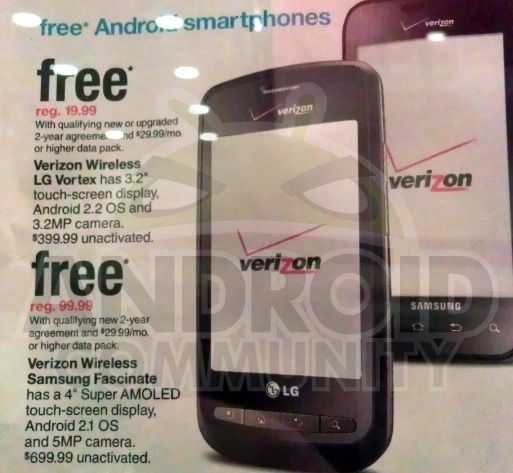 SO you’re in the market for a device, yes? How about ANY of the following? They’re all on sale and they’re all under $100, several of them free – all of them on contract. What you’ve got on one hand is a couple of devices at Target. First there’s the Verizon LG Vortex – a mid-tier that’s $399.99 off-contract with a 3.2-inch screen, Android 2.2, and a 600 MHz processor – it’s FREE on a two year contract. Next there’s the Verizon Samsung Fascinate, costing $699.99 unactivated, having a 4-inch Super AMOLED display, Android 2.1, and a Cortex A8 1GHz Hummingbird processor – it’s also FREE with a two-year contract.

Then we get in to the Amazon deals. First there’s a deal that we listed yesterday, but heck, why not list it again: the normally $699.99 off-contract ATRIX which has a 4-inch screen and an NVIDIA Tegra 2 dual core processor at 1GHz is now ONE CENT on a two-year contract. This is a device that we tend to talk about quite a bit – have a look at our big [ATRIX portal] for all the information you could ever need about this fabulous device.

Next is the LG Revolution 4G – this is one of the first three devices in the world capable of running on Verizon’s 4G LTE network and the first LG device to do so. This device is usually $699.99 off-contract, has a 4.3-inch display with a single-core Snapdragon MSM8655 1GHz processor. The Revolution is $99.99 on a two-year contract and you can get a full review of this device courtesy of Android Community.

Finally there’s the Samsung Infuse 4G on the AT&T network. This device has a gigantic 4.5-inch Super AMOLED Plus display. This is the biggest Super AMOLED Plus display – also the brightest display in the world, in the handset game today. It’s also got the distinction of being the second-thinnest Samsung device, the thinnest being the Samsung Galaxy S II which is the thinnest smartphone in the world. The Infuse 4G has a single core 1.2GHz Hummingbird processor and, while it costs $599.99 off-contract, you can get it on Amazon today for $89.99 on a two-year contract. We’ve got a review of the Infuse 4G right over here.

So what have we learned? We’ve learned that if you want a phone off-contract, you’re going to pay one gigantic amount of money. We’ve also learned that if you’re willing to tie yourself to a carrier for two years of your life, you can get even the most excellent devices for free.