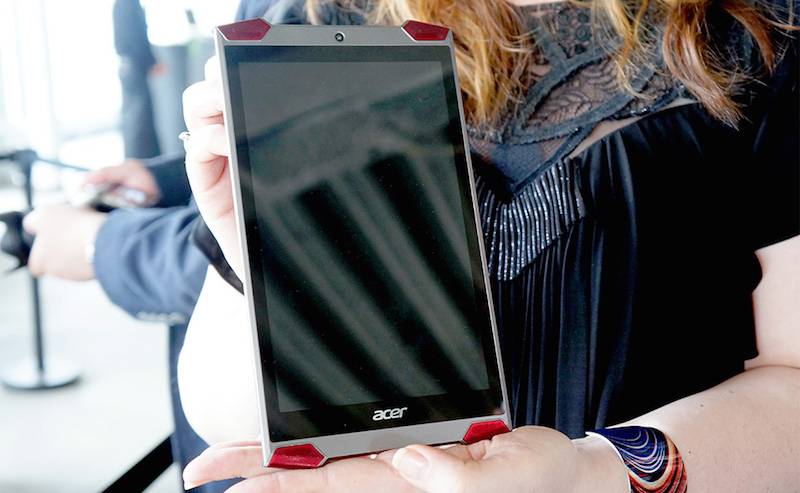 After all those devices recently introduced in a tech event, Acer still has another one up its sleeves: an Android gaming tablet. Not that an Android tablet can’t be used for gaming but this one which is slated to be released in the market in the last quarter is special. Tablet is expected to be focused just on gaming and this one looks really tough and a bit futuristic with those edges.

All those smartphones, tablets, notebooks, and that sole gaming display will be joined by this nice gaming tablet this 2015. It’s Android-powered and the design seems to appeal to the gamer geeks who prefer unique-looking devices. This one is said to make use of haptic feedback technology, something Google is trying to venture on. So yeah, the phone will vibrate, pop, shake, blast, or whatever when you’re playing Games You Can Feel and other titles coming soon.

This Android Gaming Tablet comes with an 8-inch screen and four front-facing speakers on the red corners. We don’t know what this one is called exactly but we know it to be the Predator tablet which will work with Predator PCs. Not much details on the specs yet but it could rival the NVIDIA Shield tablet or the Archos Gamepad. We don’t know any tablet that’s dedicated to haptic technology gaming yet so Acer definitely has an edge–that is, if the niche will ever be carved.

With haptic feedback in mind, we’re guessing the Predator will blast off loud sounds in your face and scare you to death. We’re interested to know which games will first be updated and optimized for the Acer Predator tablet.