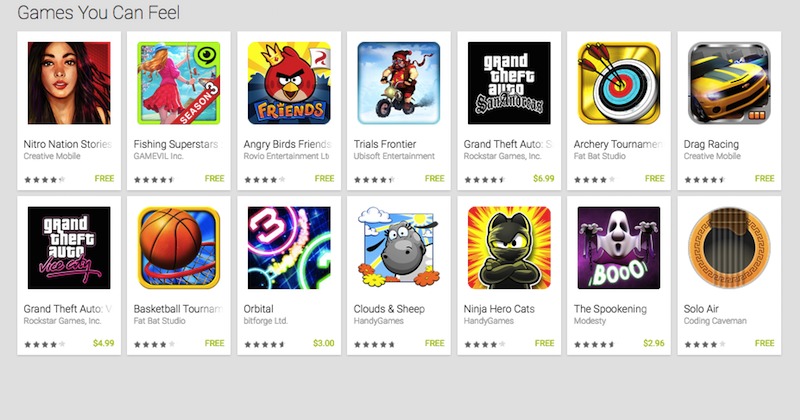 A responsive touchscreen display isn’t just enough for a more enjoyable and uninterrupted mobile gaming. Soon, geeks and gamers will demand for haptic feedback technology to arrive on their games and gadgets. Going ahead of other names in the industry, Google has just introduced a new category on Google Play for special haptic feedback-friendly games. Once inside the Google Play Store, you’ll see a small collection of games of this sort.

Google officially calls this set as “Games You Can Feel”. The Internet giant is currently working with Immersion, a haptic technology group, that specializes in bringing haptics to the digital users. You may remember that four years ago, Immersion unveiled MOTIV Haptics dev platform for Android. The aim of the platform is to make it easier for developers and designers to integrate haptics feedback technology into Android devices. It’s simply an SDK for anyone who wants to try haptic technology.

Looks like Immersions’ efforts are finally paying off although not in a big scale yet. The launch of these games could probably mark a totally new mobile gaming experience. Some games on the list are already familiar like ‘Angry Birds: Friends’, ‘Grand Theft Auto San Andreas’, and ‘Grand Theft Auto Vice City’.

Here is a complete list of titles under the ‘Games You Can Feel’ category:

Almost all games are free except for the Grand Theft Auto titles available for $6.99 and $4.99, Orbital ($3.00), and the Spookening ($2.96). Be ready to “roar, shake, blast, bounce, flutter and pop” with any of these special Android games right on your smartphone or tablet.

Download Games You Can Feel from the Google Play Store